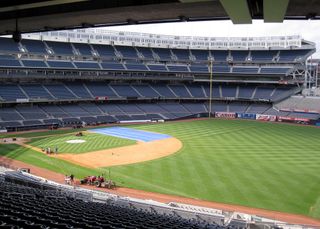 Liverpool will play a friendly in Yankee Stadium as they return to the United States for this summer’s pre-season preparations.

The New York Yankees baseball team’s historic arena will host the third and final match of the mini-tour, against Sporting Lisbon on July 24.

Prior to that Liverpool will take on manager Jurgen Klopp’s former club Borussia Dortmund in the first competitive football match in the University of Notre Dame’s 77,000-capacity stadium in Indiana, on July 19.

The Reds then fly to Boston where they will once again play a friendly against Sevilla at Fenway Park – home of the Boston Red Sox baseball franchise, the other prized asset in Liverpool owners Fenway Sports Group’s portfolio.

“Each of the stadiums has their own deep-rooted heritage similar to our own and we’ll face three great opposition teams in Borussia Dortmund, Sevilla and Sporting.”