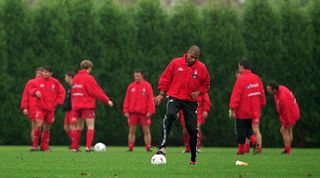 One of Arsenal’s few reliable performers in the mid-’70s, keeper Jimmy Rimmer spectacularly shot himself in the foot after telling punters in a Southgate pub: “I played well today – it was a shame about the other 10.”

“After Rodney Marsh arrived,” trilled Manchester City winger Neil Young of the ex-QPR maverick’s March 1972 transfer, “I’d attempt a give-and-go, and there he was juggling the ball like a bloody seal.”

Young’s complaints were echoed by exasperated City players as the wheels come off the Sky Blues’ title challenge. “He was a flashy sod,” blasted skipper Mike Doyle. “They acted like a Northern Mafia,” countered Marsh.

Expecting to be throttled, Harris was stunned when a smirking Smith told him: “I could get to like you, Chopper.” “It turns out that the Liverpool players weren’t too keen on Emlyn’s whining voice either,” recounted Harris.

5. “Talk us through your forehand, Gordon…”

Irritating his Millwall team-mates throughout the 1973/74 season with his general cockiness and penchant for Norman Wisdom impressions, winger Gordon ‘Merlin’ Hill copped some stick. Whether pretending to be TV reporters keen to speak to him about his tennis skills, or by hiding his stuff in the dressing room, ‘Merlin’ was the butt of many a joke. Until he joined Manchester United in 1975, becoming an Old Trafford cult hero. Nice one, lads.

QPR’s 1970s legend Stan Bowles didn’t rate reserve striker Martyn Busby. “I get it, Stan,” ventured a puzzled Busby at half-time in one game. “You want me to keep making these decoy runs. Is that why you’re not giving me the ball, so we can fool the opposition?” Not quite. “We’re not giving you the ball because you’re crap,” came the sneering reply.

The Dutchman’s first post-strike goal came against rivals Derby in November but his team-mates preferred to celebrate with Scot Gemmill, who’d set it up. “I couldn’t give a shit what Pierre does next,” stropped team-mate Steve Stone at the end of the season.

Emotions were running high within Zaire’s 1974 World Cup camp after a 9-0 defeat to Yugoslavia. Matters worsened when the team accused midfielder Kidumu Mantantu of deliberately over-hitting his passes to make them look bad in practice matches. After a hasty internal enquiry, the midfield star – and captain – was forced to eat his meals alone and train by himself. Ouch.

9. Sammer puts his foot in it

In the 1980s, displaying any kind of leadership qualities in East German football was frowned upon. So when Dynamo Dresden youngster Matthias Sammer began bossing and cajoling his fellow pros, the squad exacted its revenge on the renegade midfielder by presenting him with a new set of football boots which were three sizes too large. “It was pure harassment,” squealed Sammer. He quickly headed west when the Berlin Wall fell.

11 footballers who played through the pain barrier (and definitely, definitely shouldn't have)

10. The biggest ego in the Big Apple

Ex-Barcelona centre-back Rafa Marquez did little to endear himself to New York Red Bulls colleagues in a two-year stay. “Unfortunately there isn’t an equal level between perhaps Thierry Henry and myself, and our team-mates,” he said in 2011, hammering a nail into his own coffin.

After some long, awkward silences in the dressing room, he was sold to Mexican club Leon in 2013. It’s fair to say that none of his ex-team-mates waved him goodbye.

This feature originally appeared in the February 2014 issue of FourFourTwo. Subscribe!