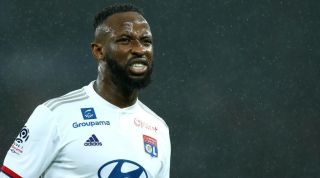 Lyon coach Rudi Garcia is hopeful that Premier League targets Moussa Dembele and Houssem Aouar will stay put after revealing that no offers have arrived for the pair.

Dembele has long been linked with a move to Manchester United, while Man City and Juventus are among the clubs credited with an interest in Aouar.

Lyon sporting director Juninho Pernambucano recently hinted that the striker and midfielder could be departing this summer.

But Garcia was adamant that he can hold onto the duo – as well as former United forward Memphis Depay.

“I hope that Houssem Aouar will stay,” Garcia said to RTL (via Goal).

“Him and Moussa Dembele. I can tell you categorically that we have not received any offers for them.

“I am told that Memphis is also not on the list of possible departures.”

Lyon were one of the clubs to suffer from the premature ending of the Ligue 1 season due to the coronavirus pandemic.

They missed out on Champions League football after finishing the season in seventh place, leading Juninho to publicly suggest that offers could be considered for their key players.

Former Celtic and Fulham striker Dembele has regularly been linked with a return to English football thanks to his impressive form in France.

This season, the 23-year-old scored 22 goals in all competitions, after notching 23 in his debut campaign in 2018/19, following his arrival from Glasgow.

France Under-21 international midfielder Aouar caught the eye with nine goals and seven assists in 37 appearances this season.