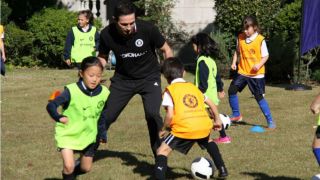 Chelsea icon Frank Lampard believes that Manchester United are the team most likely to challenge runaway Premier League leaders Manchester City this term because of their squad depth coupled with Jose Mourinho's quality.

Pep Guardiola's City have been in phenomenal form in the Premier League, dropping just two points from 12 matches and scoring an incredible 40 goals in the process.

Second-placed United are eight points adrift, but have thus far provided the most consistent challenge from the chasing pack.

Chelsea are just a further point behind, but having won the league under Mourinho at Stamford Bridge, Blues legend Lampard believes the Portuguese could make the difference.

Speaking to Omnisport via Chelsea's club partners Yokohama Tyres, Lampard said: "The reason Manchester United can win the league, for me, is the players, the quality of the players, I think.

"But I look at Manchester United and they are around that area [near the top of the table] with a team that is very strong, especially because of their manager and for that Manchester United could be competitive towards the end of the season as well."

Lampard was full of praise for Conte, though, hailing his impact at the club after coming in at a difficult time.

"Antonio Conte came to Chelsea at the time to win the Premier League," Lampard said.

"This was a difficult period for the club with things that don't happen normally, so to change the things around with pretty much the same group of players shows the great manager that he is.

"He is great tactically, great with the players and he likes to work hard together. Last season they won the league comfortably because of Conte's managing, I think.

"But unfortunately, in the league, if you don't win regularly then people start to talk about your job.

"But I think that everybody at Chelsea knows what a great manager Conte is and I hope he stays and will be more successful."