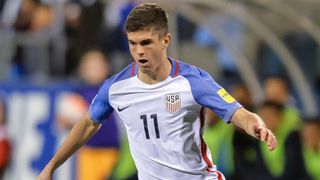 United States youngsters Christian Pulisic and Jordan Morris have been included in the host nation's preliminary squad for the upcoming Copa America Centenario.

Borussia Dortmund teenager Pulisic and MLS rookie Morris were selected in Jurgen Klinsmann's initial 40-man squad, which will be trimmed down to 23 players by May 20, before the tournament gets underway on June 3.

Pulisic, 17, made his international debut in a World Cup qualifier last month and the midfielder continues to impress in the Bundesliga.

Klinsmann does have plenty of experience at his disposal, with Clint Dempsey, Michael Bradley, Tim Howard, Chris Wondolowski, Brad Guzan and Jozy Altidore at his disposal.

The German did make one surprise inclusion, with 27-year-old Nottingham Forest defender Eric Lichaj brought in from the international wilderness, having not earned a cap since 2013.

Klinsmann and Co. open the Copa America against Colombia in California on June 3, before taking on Costa Rica (June 7) and Paraguay (June 11) in Group A.