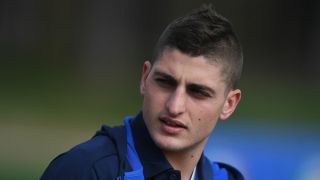 Marco Verratti said he holds no grudges having accepting an apology from L'Equipe after the French publication made inaccurate claims about him and Paris Saint-Germain team-mate Blaise Matuidi.

L'Equipe claimed Verratti and Matuidi partied two days before PSG's humiliating 6-1 defeat to Barcelona which sent the French giants crashing out of the Champions League 6-5 on aggregate.

Based on apparent witnesses in a Paris nightclub, those accusations proved to be incorrect, leading to an apology after PSG had hit out at L'Equipe in the aftermath of the article.

"Excuses accepted, no grudges," Verratti wrote via Instagram after uploading a photo of L'Equipe's apology.

A statement from L'Equipe read: "On last March 9, during L'Equipe Type, we claimed PSG players Marco Verratti and Blaise Matuidi were in a nightclub two days before the second leg of the Champions League clash against Barcelona.

"The next day, this information appeared in the printed and on the online editions of L'Equipe.

"Wwe know for certain that this information is false and was given to us by external sources with bad intentions. We would like to apologise.

"We also apologise to gentlemen Marco Verratti and Blaise Matuidi for our wrongdoing against them, as well as their club and employer Paris Saint-Germain."