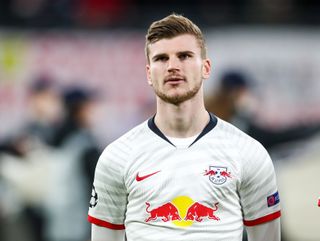 Timo Werner will reportedly refuse to feature in the rest of RB Leipzig’s Champions League campaign in order to join pre-season training with new club Chelsea.

The Germany international has agreed to join the Blues in a £45 million switch at the end of the season.

But a report in The Times claims that the striker intends to head to London before his current employers have concluded their European campaign.

Leipzig defeated Tottenham Hotspur 4-0 on aggregate in February to book a place in the Champions League quarter-finals.

But star forward Werner is expected to tell the Bundesliga club that he won’t be available for their remaining matches in the competition, as he looks to prepare for his debut Premier League season instead.

The 24-year-old has penned a five-year deal with Chelsea worth a reported £9m a year, and is willing to give up on Leipzig’s bid for European glory in order to go through a full pre-season with his new club.

The Champions League is expected to be concluded by 23 August and could be played as a mini-tournament in Lisbon behind closed doors.

Werner’s absence would be a huge blow to Leipzig’s hopes, as the striker has scored four goals in eight European games this season, including the winner in their 1-0 first leg victory away to Spurs.

The former Stuttgart forward will be joined at Stamford Brdige this summer by Ajax winger Hakim Ziyech, who will join at the end of the Premier League season after agreeing a £34m switch.