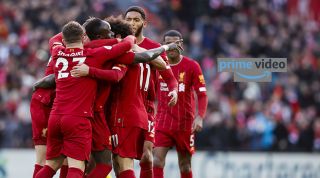 In June 2018, it was announced that Amazon Prime had won the rights to show 20 Premier League matches per season from 2019-20 – and you can take full advantage of that for nothing.

At this stage it’s a bit of a trial for the retail and video giants, who aired several matches across their service in early-December and have their second instalment of matches on Boxing Day and December 27. On the former you'll get nine matches spread across four kick-off times, then Wolves vs Manchester City on the 27th. It's a naughty Richard Scudamore dream.

In short: New members can try Prime for 30 days FREE – so sign up in early December, get the full month’s worth of Premier League football, plus gratis one-day delivery for your unorganised Christmas gift buying

Amazon Prime usually costs £7.99 per month or £79 for the year, but you can take advantage of the crafty offer above. For that, you’ll also get access to their full range of Prime movies and TV shows (including the All Or Nothing Manchester City documentary series, for example) – ideal to accompany your obscene acts of yuletide overeating.

COMMENT Amazon Prime's Premier League fixtures could herald a new age of on-demand football. So what will change?

Outside of the UK? Use our VPN guide to watch Premier League football from anywhere in the world

While you're here, why not take advantage of our brilliant subscribers' offer? Get the game's greatest stories and best journalism direct to your door for only £9.50 every quarter – that's only £2.90 per issue . Cheers!