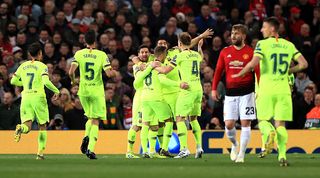 From the confines of the Premier League, the mere idea of a European Super League seems callous and wrong.

Football is a romantic sport, and the fairytale successes of Leicester in 2016, Nottingham Forest in 1978, Derby in 1972 and Ipswich in 1962 mean that every fan dreams of their team rising from the abyss of lower divisions and becoming Premier League champions.

So when Der Spiegel released leaked plans for a continental breakaway league back in November, it was no surprise to see English fans and media react with such dismay.

But a quick look at the recent history of other European leagues – namely, the repeated domination of Juventus, Paris Saint-Germain, Bayern Munich, Real Madrid and Barcelona – makes it clear why they are much more open to forming this sporting behemoth.

By the end of this season, Juventus will have won their eighth Serie A crown in a row; PSG their sixth title in seven years; and Barcelona their seventh La Liga in 10 years. Bayern Munich are favourites for a seventh consecutive Bundesliga, having hammered closest rivals Borussia Dortmund 5-0 just over a week ago. Even Real Madrid can point to repeated success in the Champions League, which they have won in four out of the last five years.

The hegemony of these teams domestically means that the Europeans leagues haven't just become preposterously predictable, but they’re usually all wrapped up by Christmas too.

The gap between these repeated champions and their domestic rivals is only going to get bigger. Not only do most of them have their own lucrative TV deals that dwarf the income of those in the same league, but UEFA have reportedly given them an even greater share of Champions League revenue to keep them in the competition.

At the same time, the likes of Juventus and PSG must bring in players with the clout of Cristiano Ronaldo and Neymar – not to further confirm superiority in their own leagues, but so they can try to claim the one and only trophy that will make or break a successful season: the Champions League.

It's a self-sustaining circle of domination that shows no sign of ever being broken.

What you NEED to know about the planned Champions League reforms

But what does Europe have to do with England? Brexit shows just how poor we are at taking our European brothers into consideration, and the Premier League clearly doesn’t suffer from the same problem as Spain, Italy, France and Germany. In fact, it is so competitive that no team has successfully defended the title since 2008/09.

What’s undeniable, though, is that over the last 30 years, greed in the Premier League has eclipsed the romanticism of the beautiful game. Its mirroring of the NFL means it's now the purist definition of a capitalist machine. Manchester City, Manchester United, Arsenal, Chelsea, Liverpool and Tottenham are the wealthiest of the lot, and their league positions reiterate that.

These clubs are so huge now that they are as much corporations as they are football teams, and as such, the powers that be – the ones who count the money and have to raise profits every year – will eventually find the allure of the European Super League’s billions too much to ignore.

There’s also the small fact of England’s inflamed ego when it comes to anything and everything football. The ego that was born with “inventing” the game. The ego that meant the national team refused to enter the World Cup until 1950, and the Football Association barring Chelsea from participating in the first ever European Cup. The ego that comes with being home to the “best league in the world”.

Not only will these clubs want to be part of the European Super League, they’ll want to lead it. That’s why five English teams made up the alleged 11 founders of this proposed competition.

They don’t care how unpopular it will be in English football. Or how it will affect the other 86 Football League teams. Or that it will be the final, catastrophic death knell which will irreparably change the game completely.

They just don’t want to be left behind. They know the anger will die down. And they know that if the Super League does form, it will be the greatest coming together in footballing history.

QUIZ Can you name the 59 outfield players with 30+ Premier League appearances this season?