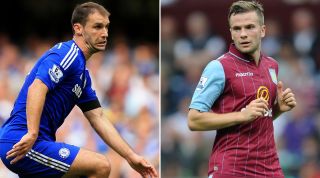 Chelsea supporters hadn't been able to properly say goodbye to the club's all-time top scorer; Super Frank's departure, after 13 years and more than 650 appearances, not confirmed until June. Good news, then, that the Manchester City loanee should still be around in January for a rousing Stamford Bridge send-off, providing any goals he score that day are no more than a consolation.

Jose Mourinho was keen to distance himself from Sunday's love story, instead lamenting his team's wastefulness in front of goal. The Blues did a very un-Mourinho like thing by failing to close out a game against 10 men - goalscorer Andre Schurrle going from hero to zero by not tracking James Milner - yet a draw against direct rivals for the title was widely seen as satisfactory on reflection.

The point extended their lead atop the table from two to three, which will be expected to be maintained against an Aston Villa outfit who have been surprising plenty so far this season. Dogged smash-and-grab displays have helped Paul Lambert's men to six away points from six at Stoke and Liverpool, but they were left feeling ill, quite literally, as Arsenal scored three times in a little over three minutes to consign them to their first defeat.

Virus-hit Nathan Baker and Darren Bent both withdrew on the morning of Saturday's game, while Ashley Westwood experienced symptoms in the warm-up. Andreas Weimann was sick during the half-time interval and both Brad Guzan and Fabian Delph played on despite feeling a bit dicky.

"I don't feel 100% and I think there's a few of them still in there not feeling that good so I'll probably shut the training ground for a day or so and see if we can eradicate it," said Lambert.

An August exit from the League Cup to Leyton Orient has meant a week in quarantine should have done everyone the world of good as they bid for back-to-back wins over the Blues.

The teams are deadlocked on 51 league wins apiece dating back to 1907, but Chelsea had won four on the trot prior to March's costly 1-0 defeat in the Midlands. Two of the last five meetings at Stamford Bridge have ended in 8-0 and 7-1 landslides for the Londoners, but Villa have proved to be prickly opponents in SW6.

You've only got to go back three years to find their last win there (3-1) after coming away from the capital with entertaining draws in 2011 (3-3) and 2007 (4-4). Villa have not won three Premier League away games in a row since April 2010, when they beat Bolton, Portsmouth and Hull… immediately after losing 7-1 at Chelsea.

Christian Benteke, who has scored in two of his last three outings against Chelsea, is nearing a return to full fitness but is a week away from contention. Ron Vlaar is also on the comeback trail from a calf problem and could feature, but Libor Kozak's broken leg is not yet mended.

Utility man Chris Herd has joined Bolton on a one-month loan deal and played at Stamford Bridge on Wednesday night in the League Cup, three days ahead of his parent club's visit.

Chelsea's only absentee is Ramires, the Brazilian midfielder injuring an abductor muscle at Manchester City which forced him off the field after 63 minutes. Diego Costa's hamstring issues continue to be monitored on a game-by-game basis, but he will be able to start Saturday's encounter.

Don't expect too much flamboyance from the visitors, who will sit back and aim to stifle. The Villans recorded just 24.6% possession in their 1-0 win at Anfield, while that figure didn't rise much higher in the same-scoreline success at Stoke (35.8). It'll be up to Chelsea to practice patience and break them down, with Hazard likely to see a lot of the ball on the left flank and weave his way towards goal.

The Belgium international has attempted the most take-ons in all three of the Blues' home games this season and was particularly potent in the 4-2 victory over Swansea, beating his man on 9 out of 10 occasions.

Standing in his way will be the rejuvenated Hutton, now tied to a new three-year deal having previously been cast out on loan to Bolton, Real Mallorca and Nottingham Forest.

The Scot was solid at Anfield, making the most interceptions (4), the second highest amount of clearances (10), blocking 2 crosses and even popping up at the other end to set up 1 of the visitors' 3 chances.

Mourinho vs Lambert dates back to January 2007 when Jose's Chelsea met Paul's Wycombe in the League Cup semi-finals.

A Jermaine Easter equaliser earned the Chairboys a 1-1 home draw in the first leg before the Blues ran away with the second; doubles from Lampard and Andrei Shevchenko easing them into the Millennium Stadium showpiece against Arsenal.

The pair exchanged heated views on the touchline during Villa's last visit to Chelsea, a 2-1 defeat in August 2013.

Lambert fumed over a penalty appeal which was turned down and the fact that match-winner Branislav Ivanovic 'should have been sent off' for elbowing Benteke.

"Lambert has a certain type of personality and behaviour," Mourinho said. "He reminds me of myself 10 years ago when I was complaining every decision.

"I wanted to coach my team and at same time have the whistle in my lips. With experience, he will change - now he complains over every decision. He is a young manager, very intelligent, he does very, very well in that he adapts to quality of his players. I like him, no problem."