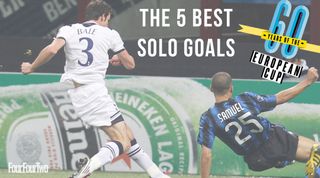 From zigzagging runs to outright pace, here are the pick of the strikes where just one player has weaved their way to goal. And yes, Messi features here.

If you think we've missed one, it's probably here. Or in here...

In his days before becoming a long-serving commentator for Rai Sport, Mazzola wasn't a bad player. He made more than 400 appearances for Inter Milan, helping them to two European Cups.

Inter lost to Celtic in the 1967 final but Mazzola's goal in the second round in Hungary remains revered. Not content with rounding the goalkeeper, he thought he'd dribble past another defender and let the keeper get back to his line before firing the ball home.

Better known as a penalty box predator than a prodigious dribbler, Ruud bamboozled Basel at St Jakob Park, collecting the ball wide of the area before somehow finding the net from near the byline.

Russian international Zhirkov was a Blackburn Rovers fan as a youngster (no really), so maybe he used Jason Wilcox as his inspiration as he flicked the ball past two Hamburg players before slaloming through the defence to slide home this goal for CSKA Moscow. Skills like that later earned him a move to Chelsea.

Tottenham's group stage game at the San Siro seemed to be petering out into a demoralising 4-0 defeat when Bale announced himself on to the world stage with a stunning hat-trick. The pick was his first, which we've already featured in our 20 best goals of the European Cup and Champions League, so here's his second as he singlehandedly takes on the Inter defence once again before finding the corner of the net.

Messi produced one of his best and most important goals in an El Clasico Champions League semi-final at Santiago Bernabeu.

Having just put Barcelona ahead in the first leg in the Spanish capital, he then weaved his way through the Real defence before finishing off a majestic second goal to effectively settle the tie.