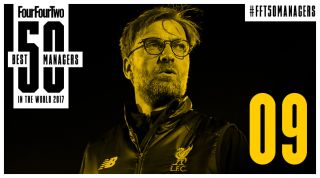 Danny Blanchflower wasn’t completely wrong, but football is about more than just glory. It’s about joy, belonging, belligerence, excitement, pride, pettiness and personality – and, where possible, glory too.

Plenty of managers can deliver some of the above. Jurgen Klopp might be the only one who can deliver them all.

While last season’s fourth-placed finish may not seem like the sort of messianic intervention that Liverpool’s more hopeful fans craved upon his appointment, the fact is that Klopp’s short time at Anfield has seen a directionless, dejected club transform into an expectant and buoyant one.

The change of mood has been reflected plainly in the team’s trajectory: six months after he took over, they were in a European cup final. His first full season brought a four-place jump in league position.

In a division whose top-six spots have never been more fiercely contested (Arsenal finished fifth with a points tally that won Manchester United the league 20 years ago), the only serious flaw in Liverpool’s 2016/17 campaign was their own early success: it’s hard not to be underwhelmed when a race for first becomes a race for fourth.

Yet the very fact that a squad as thin, injury-prone and lacking in overall pedigree as Liverpool’s were able to enter the new year as bona fide title challengers is a testament to Klopp’s supremacy as a coach.

And ‘coach’ is the operative word, because much of Klopp’s strategy has always lay in shunning – in relative terms, at least – the retail therapy that is so ubiquitous throughout top-level football. Rather than hoovering up a job-lot of new players every summer, Klopp works hard to make his current ones better. Almost every player at the club has improved to some degree under his supervision.

The trajectories of Adam Lallana, Jordan Henderson and, to a slightly lesser extent, Roberto Firmino – all treading water at the time of his appointment – have been the most eye-catching, though it's worth noting how the capabilities of Sadio Mane, Georginio Wijnaldum and Joel Matip all took a steep upturn immediately after joining.

Progress on a budget

In Klopp’s first summer transfer window, a year ago, Liverpool spent less than half of what each of the Manchester clubs did, £50m less than Chelsea and only £2m more than Leicester. They were one of three Premier League clubs to record a net profit, and their five signings had an average age of 24. In an age of rampant short-termism, Klopp preaches sustainability.

This tightly focused approach mirrors his Borussia Dortmund project, where his eye for potential was among the sharpest in Europe (Ivan Perisic, Ilkay Gundogan, Shinji Kagawa, Mats Hummels and Robert Lewandowski were all snapped up for under the £5m mark).

His ability to keep competitive with a certain rival club that made an annual traditional of cherry-picking Dortmund’s star player was little short of miraculous. Liverpool fans will hope his keenness to blood youth may see the emergence of a homegrown gem or two in the manner of Mario Gotze.

In light of the above, you could argue that Klopp is almost a victim of his own PR success: he has become so synonymous with pure personality – namely that guffawing, goofy enthusiasm – that it’s easily forgotten what a straightforwardly excellent manager he is.

Yet that wouldn’t be entirely right, because it’s precisely that goofy enthusiasm which marks him out from the chasing pack. Yes, Klopp’s abilities as a tactician and a motivator are up there with the best of them, but he can also unite a fanbase in a way few of his peers are capable of.

From Yellow Wall to Reds

That much was evident in the deafening roar of the Yellow Wall of Dortmund’s Westfalenstadion, and – while the process is still ongoing on Merseyside – it’s evident in the way Anfield has been palpably enlivened since Klopp has entered the dugout.

A stadium that had spent two decades being sapped of its legendary rowdiness has, in a year-and-a-half under the German, experienced at least one all-time great European night, an expanded capacity and a more general dialling up of its decibels. It’s a process that will surely be accelerated by next season’s return to the Champions League.

Call it what you want – charisma, aura, va va voom, or simple likability – but the point is that Klopp has it. And in a profession where excuses, blame-shifting and Mean Girls-style bickering too often reign supreme, his sunny optimism is hugely refreshing.

Football – and football managers especially – is guilty of taking itself far too seriously at the best of times; Klopp’s determination to enjoy himself is a reminder of what we’re all in it for.

Room to improve yet

Klopp is not perfect. There remain doubts over his substitutions (or rather his lack of them; something that might be remedied by a fuller squad), and whether his ultra-intensive gengenpressing setup can be straightforwardly transplanted into English football without long-term wear and tear.

The way injuries decimated his squad in the second half of last season, and the way his side seemed to run out of gas just after the midway point, suggests there are tweaks to be made.

But as flaw go, these are mere afterthoughts. In purely managerial terms, it’s hard to argue against the idea that he is close to the complete package. But beyond the tactics, the team-talks and the tracksuits, Klopp’s most singular feature is that he seems to recognise football’s fundamental triviality – which makes him a far more important manager than most.