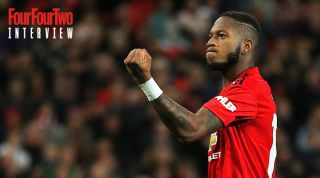 The 25-year-old completed a £52 million move to Old Trafford in the summer after making more than 150 appearances for Ukrainian outfit Shakhtar Donetsk, and has scored once in nine games for the Red Devils.

Local rivals Manchester City had been keen to recruit the Brazil international too, with Pep Guardiola’s side approaching the player at the start of 2018. Although that move didn’t materialise, Fred says he didn’t need asking twice once Mourinho registered his interest a few months later.

Speaking exclusively in the December 2018 issue of FourFourTwo magazine, out now, he says:  “That’s true, I received an offer from them [City] and even talked to my Brazilian team-mates who play for our neighbours.

“They were trying to convince me to join them, but in the end it didn’t happen. Then it was the summer and, as I said, there were other offers, including from United. I quickly decided that was the right move for me.

“Mourinho is a top, top professional and every player likes to work with such a winner. I’m learning things from him, that’s for sure. He can be quite strict, but that’s part of his job. He’s also friendly and funny off the pitch, and jokes with us in the dressing room. Jose was crucial in my decision to join Manchester United and I’m grateful for his interest in my football.”

QUIZ! Can you name the players who've played for Man United against Juventus since 1996?

Fred spent five seasons at Shakhtar after swapping sunny Brazil for shivery Ukraine – a route many Samba starlets have taken in recent times to aid their development – and reckons Manchester is positively balmy compared to his previous home.

“Oh my God, it’s really cold in Ukraine – have you ever been there?” he tells FFT. “At first, I thought it was impossible to sustain human life in such cold conditions. But we adapt and go on – that’s life.

Ibrahimovic: Ex-players should shut up and mind their own business about Pogba

“Manchester is much easier in comparison. Well, actually, we’re only in the autumn, so let’s see how things go during the winter...”

Read the full interview with Fred in the December 2018 issue of FourFourTwo, in which we chat to Zlatan Ibrahimovic about life in LA and tackling Donald Trump. We also meet Bayer Leverkusen starlet Leon Bailey in a field full of cows, remember when British bosses ruled La Liga, learn everything there is to know about football commentary, and ask what happened to Adriano? Plus, Bruce Grobbelaar explains how the experience of fighting in the Rhodesian Bush War as a teenager helped him to stand up to King Kenny at Liverpool. Order a copy, then subscribe!