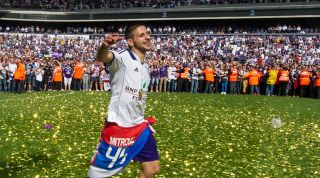 Aged 20 (and only just), Aleksandar Mitrovic already looks like a striker with all the right attributes to succeed at the top. As handy a poacher as he is scoring from anywhere else in the box, the youngster plays with a healthy brand of arrogance that's taken him from the lower reaches of Serbian football to the Champions League and international recognition within three seasons.

Signed by mass producers Partizan Belgrade aged 11, Mitrovic was sent out to feeder club Teleoptik for experience and began finding the net sporadically either side of the winter break. Partizan soon realised his potential and brought him into the fold the following season, for which he rewarded them with 15 goals in 34 appearances in all competitions. It wasn't just his scoring that earned him plaudits, though – his overall performances resulted in a place in the Serbian SuperLiga's Team of the Season.

Before long Mitrovic was sold to Anderlecht for €5 million. Yet the young Serb didn't let up, scoring 16 goals in 32 league games in his debut league season, plus another three in the Champions League.

Success seems to follow Mitrovic wherever he goes. In his short career he has already won the Serbian SuperLiga with Partizan, the Belgian Pro League in his first season with Anderlecht and helped Serbia to Under-19 European Championship glory in 2013, grabbing an assist in the final against France en route to being named the tournament’s best player.

Mitrovic has started this season as he finished the last, finding the net five times in 10 league games to help fire Anderlecht to the top of the Belgian Pro League.

He's by no means the finished article, of course – he recently missed an easy chance when Anderlecht led Galatasaray away from home in the Champions League, and were then condemned to a point – but all the signs point to a bright future for the Serbian.

Arsenal, who have been keepings tabs on the forward for the past few seasons, will get a better look at Mitrovic when Anderlecht visit the Emirates. They certainly aren't the only side showing interest, though. Speculation is already increasing as the January window draws closer, with (ready?) Roma, Bayern Munich, Borussia Dortmund, Liverpool and Milan all said to be keen. If Anderlecht are to avoid finishing bottom of their Champions League group for an eighth time in succession, Mitrovic will need to work his magic.

Mitrovic has outstanding potential, as demonstrated by his ability to score all sorts of goal last season for Anderlecht. Last season’s highlight reel included a decisive tap-in against rivals Club Brugge, a majestic dink and finish over a helpless KV Oostende goalkeeper and a number of powerful headers (see 'em all below). Whatever the angle, Mitrovic seems to find a way to put the chance away.

His height and muscular physique are striking, and already he is using them to great effect, bullying defenders with a lethal combination of power and pace. His movement is first class, too – like any good striker he creates space for himself and plays off his instincts. His fervent celebrations highlight how hungry he is to get on the scoresheet every week.

Clearly he enjoys being the centre of attention and has a selfish streak that will need to be ironed out over time by a world-class coach. There are also slight disciplinary concerns: he was sent off twice last season, and missed the 2012 U19 Euros following a red card in the opening game against France.

Keeping his feet on the ground, and working hard for the team, will serve Mitrovic well when he joins a big club and will be expected to put in a fair defensive shift.

He's unproven as of yet in a major league, and at international level he is still finding his feet, but the quality of his goals elsewhere so far suggests he has the potential to make a smooth transition when the time comes.

Jose Mourinho was impressed with Mitrovic after seeing him score his first international goal for Serbia against Croatia in 2013. “He was the best player on the pitch,” said the Chelsea chief. “He managed to keep the ball well and that was the key. That boy has everything to be a European star.”

Anderlecht manager Besnik Hasi, however, was unimpressed when Mitrovic returned to pre-season training out of shape. “I’m not going to pretend that he has completed his programme,” fumed the coach. “I had asked him to rest, but not in that way. When I give a player something, I want to get something back.”

Anderlecht broke their record transfer fee to secure the signing of Mitrovic, spending €5m on the forward (a record subsequently broken by Steven Defour's summer arrival in Brussels). The club clearly have an eye for young talent, having overseen Romelu Lukaku’s development from a young age before selling him to Chelsea for a large profit. The same is likely to occur with Mitrovic.

Mitrovic isn’t just another Eastern European gem for Football Manager lovers to get excited over – he's already drawn comparisons with Zlatan Ibrahimovic thanks to his confident swagger on the pitch. With so many big European clubs circling, Anderlecht are likely to find it difficult keeping him beyond next summer. When he does make his move, the 20-year-old must choose wisely.