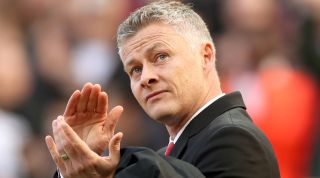 Why has Ole Gunnar Solskjaer been appointed Manchester United’s permanent manager? If you've been living in the Bremsnes caves, this table might explain why.

Since Jose Mourinho’s sacking on December 18 last year – and Solskjaer’s speedy appointment as caretaker – United have played 13 Premier League matches, winning 10 of them.

This puts them firmly at the top of the ‘Ole table’ – the Premier League table only taking into account games played since the Norwegian became Old Trafford boss.

Despite a recent loss away to Arsenal – the only league defeat under Solskjaer so far – Manchester United remain a point ahead of Liverpool and two clear of Manchester City.

In the real table, however, they are in fifth place: 18 points behind leaders Liverpool, 16 off Manchester City, and two points adrift of Arsenal in the final Champions League spot.

Here's what the Premier League table looks like, including only matches between 18 December 2018 and 28 March 2019...