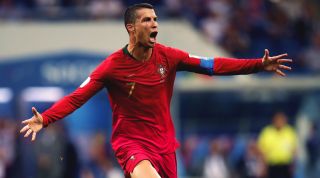 Ten minutes on the clock, 56 names to guess - some appear more than once

Famously, Cristiano Ronaldo only scored one treble during his time in England. He’s upped his hat-trick (and indeed four- and five-goal haul) game since, though, bagging a barely believable 45 of them for Real Madrid – plus eight on the international stage.

That makes a grand total of 56 hat-tricks coming against 37 different sides (there being several sides who’ve felt the force of Ronaldo’s finishing several times). Indeed, one club has been on the receiving end of five Ronaldo hat-tricks. Ouch.

They’re spread across competitions too: from the Champions League, to a memorable World Cup hat-trick, to many more in La Liga and now Serie A.

Since he's our new cover star, how much do you know about the man himself?