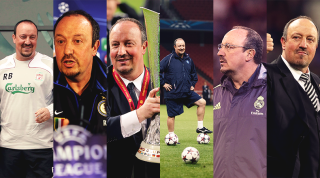 NOW TRY Quiz! Can you name the top fives and last fives for England?

The future of Newcastle United is looking like a bold new dawn - but three years ago today, Rafa Benitez guided the Toon Army back into the Premier League at the first time of asking.

Super Rafa's still a hero on Tyneside, whatever happens with the takeover - and he's managed in some varied places.

Today, we're looking for his top appearance makers at the six clubs he went to after Valencia - Liverpool, Inter Milan, Chelsea, Napoli, Real Madrid and Newcastle.

So don't worry - no need to recall the name of that Valencia right-back, his trusted keeper at Tenerife or even his star players at Dalian Professional in China.