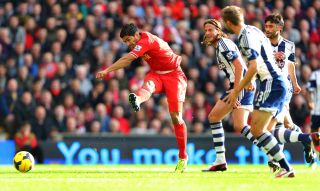 Luis Suarez doubled his Premier League haul for the season with a superb hat trick against West Bromwich Albion, a team Liverpool had lost to without scoring in their previous two Anfield meetings.

The three goals were the Uruguayan's first against The Baggies, but that wasn't for the want of trying. In last season's equivalent fixture alone, the forward attempted 7 shots, finding the target with precisely none. The season before, he hit the target with just 2 of his 6 attempts.

This time he had 8 shots, hitting the target with 5, 3 of which subsequently beat Boaz Myhill in the West Brom goal. The primary (footballing) criticism of Suarez was that, for all the mind-bloggling flicks and tricks, he was often wasteful in front of goal. His form of the past 12 months suggests he may have ironed that out; if he continues in such fashion and avoids the long arm of the Football Association, he'll be nigh on impossible to stop.

Almost everybody outside Goodison Park expected Leighton Baines to move to Manchester United this summer, and it's hard to imagine David Moyes wasn't keen on taking one of his most trusted lieutenants with him to Old Trafford. However United didn't stump up the cash, and Patrice Evra has proven that may be no bad thing.

The ever-dogged Frenchman was a key figure in United's comeback victory over Stoke City - creating more chances than any other player on the pitch (4), and digging out the cross from which Javier Hernandez nodded in the winning goal. The impressive attacking performance was complimentedd by the usual high defensive standards.

Recent reports have suggested this may be his last season at Old Trafford, but, speaking after Saturday's win, Evra told MUTV: "I haven't seen what people are saying but the thing is if someone wants to talk about my contract, which is ending after this year, they have to talk to Manchester United and with my agent. Me? I love this club so much."

That should be music to the ears, not only of the clubs' fans, but also David Moyes.

Martin Jol is still struggling to strike the right balance between artists and artisans in his side. What's good for picking off an out-of-sorts Crystal Palace isn't going to be enough to overcome the in-form Saints. Sure enough, the Cottagers barely troubled their Hampshire hosts, managing just two shots on goal throughout the 90 minutes of a Saturday evening encounter in which very little came off in an attacking sense for the hapless visitors.

Players like Berbatov, Bent and Ruiz are all well and good when everything's rosy, but perhaps not when backs are to the wall. Worryingly, as Jamie Redknapp pointed out during Sky's coverage of the match, Jol appears keen to shoe-horn more flair players - including aimless dribble fetishist Adel Taarabt - into a side that currently looks flaky going forward, and wobbly at the back. This could be a recipe for a very long and uncomfortable season for Fulham.

In the battle of the big Belgian strikers, Romelu Lukaku came out on top. The Everton striker, on loan from Chelsea, benefitted from picking up possession further up the pitch than his compatriot Christian Benteke. While both hit the target with half of their shots, only Lukaku found the net.

One man who will have been particularly interested in this tussle will have been Belgium manager Marc Wilmots, who will most likely have to chose between the pair at next summer's World Cup. Not a bad dilemma to have, of course, but on this showing it's Lukaku who'll get the nod.

If Cardiff aren't content with their point from Saturday's trip to Norwich, they certainly should be. The Bluebirds ended the game with a clean sheet, but allowed their Norfolk opposition no fewer than 31 shots on goal. It didn't cost them this time round, but it's just part of a pattern that will be cause for concern for Malky Mackay.

The concerning trend goes back to the first weekend of the season, when a West Ham side who have been otherwise largely shot-shy this season managed 18 attempts on the Cardiff goal. Manchester City managed 16 in their defeat in South Wales, before Hull had 18 in the draw at the KC Stadium and Spurs had a massive 29 in their 1-0 at Cardiff in September. More recently, they allowed Newcastle 20 shots the week before the international break, and Chelsea the same number in their following fixture.

As things stand, Cardiff sit 15th in the league with a point-per-game. Unless they kind find a way to quell the opposition tide on a consistent basis, they may find points become harder to come by, as things click into place for their rivals.

Without Flamini, Arsenal are exposed

Arsenal’s back four must have been relieved to see the Frenchman’s wavy locks back in front of them after he was so clearly missed against Dortmund. Unfortunately, his return to the side lasted just eight minutes. His head was fine, but his groin wasn’t. On came Serge Gnabry to join the Gunners’ advanced midfield trio, pushing Ramsey back alongside Mikel Arteta. Ramsey does his bit to help out the rearguard, but he doesn’t have the same discipline and defensive instincts as Flamini.

The visiting defence limited the hosts to just two efforts inside the box, but the Eagles managed 11 from outside. Had it not been for two spectacular saves from Wojciech Szczesny when Arsenal were just 1-0 up with 10 men, this game could have ended very differently. Flamini’s positional sense, ability to smell danger and physicality would have countered Palace’s long-range efforts.

For more observations from Crystal Palace vs Arsenal, click here