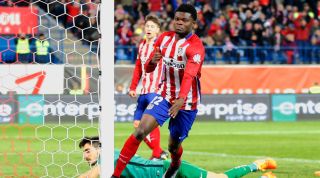 It had been a long wait, but on January 2nd, Atlético Madrid moved into top position in La Liga for the first time since May 2014. A further sign that they are ready to mount a serious title challenge again, the 1-0 win over Levante was made possible by a late goal from a second half substitute. The very substitute who had already been their saviour five days earlier, turning the tide in another narrow win over Rayo Vallecano.

The player in question wasn’t a mega-money signing like Jackson Martinez, or even a lauded young talent like Luciano Vietto, but rather a humble academy boy who few had paid attention to. In the space of a month, Thomas Partey has gone from Atleti’s most regular squad absentee to their new cult hero thanks to some decisive interventions. He won’t fly under the radar any longer.

Less than three days after the Ghanaian’s winner against Levante, the first rumours began to circulate. Marca claimed that Watford had already made an offer of £6.5m to take the 22-year-old off Atlético’s hands in the winter transfer window, a tale that doesn’t seem unlikely considering Quique Sánchez Flores’s links to the Vicente Calderón. Unfortunately for the Hornets – or any other sides that are keen – Diego Simeone has no desire to let his new trump card out of his grasp in the immediate future.

Unlike the vast majority of observers who are only now learning of the midfielder’s quality, El Cholo has long been an admirer. Last summer, well before the player’s rise to prominence, the coach insisted he should stick around despite German, Spanish and Turkish clubs enquiring over his availability. Talk about foresight.

Thomas’s time at Atlético has been a whirlwind, but much of his journey has occurred away from the eyes of the club’s supporters. Signed in 2011, it only took him four months to gain promotion from the Juvenil B to Juvenil A team. They won the league, and by the next season he was playing for Atleti B. A loan to RCD Mallorca followed in 2013, taking him off the Spanish mainland as well as away from the gaze of Atleti fans, with the islanders recently sent down to the second division.

Collectively, Mallorca experienced a nightmare season, ending up in a relegation scrap rather than pushing for a return to the top flight. In his first campaign as a senior professional, the young loanee turned out to be their best player: playing in all but five of the Palma side’s league games, he managed to score five goals from the middle of the pitch.

Mallorca changed manager three times over the course of the year. It was hardly the ideal scenario for a young player to develop in, yet didn’t seem to faze Thomas, the first sign of a mental toughness that has impressed Simeone. His encouraging displays that season weren’t yet enough to gain a place in an Atlético Madrid squad that already featured seven midfielders at the start of 2014/15, but they were enough to earn him his first year in the Spanish top flight, on loan at Almeria.

Once again, the circumstances weren’t exactly perfect: Almeria unsuccessfully battled relegation over the season. Yet once again, Thomas acquitted himself well.

At Almeria, Thomas showed that he had the qualities to be a menacing box-to-box midfielder in high-level competition, his ability to arrive effectively in the final third particularly noteworthy. He also showed that the defensive side of his game needed some refining, however, with a yellow card count that almost reached double figures in his first six months in Andalucia.

The experience ultimately proved to be worthwhile. In the second half of the year, his discipline improved significantly, suggesting a capacity to learn quickly and put instructions into action that would bode well for his Atlético future.

That idea was reinforced when, after several months of waiting, Thomas finally made his top-flight debut for the Colchoneros in late November 2015, coming off the bench against Espanyol in a delicately poised game. Rarely putting a foot wrong, the debutant shielded the ball well, pressed effectively in the right areas, and played a discrete but tidy part in a classic 1-0 win for Simeone’s side.

It proved to be the first of several noteworthy interventions in Atlético’s rise to the top of the table, the next coming against Rayo Vallecano on December 30. That evening, the offensive Thomas shone. In Vallecas, Atleti had toiled for 87 minutes without reward, and were heading for five points dropped on the bounce after losing to Malaga in the previous league fixture. Their title shot was slipping away... or so it seemed. That was until the 88th minute, when Simeone’s joker made his impact.

Picking the ball up on the halfway line, Thomas drove forward, dipped a shoulder to wrong-foot a marker, laid the ball off and kept running. Receiving the return pass first time, he took one touch, then eliminated a Rayo defender with a perfect through-ball straight into the path of Angel Correa, who thumped his shot into the net.

That assist kept first place within touching distance for Atleti, but three days later he would go one better. The scenario was eerily similar: against Levante, Simeone’s men were drawing 0-0 with almost 80 minutes played, when in the 81st, up popped late substitute Thomas. Starting his move just inside the final third, he turned away from an assailant, played the ball to Gabi, then kept moving. Receiving the return pass between the lines, the Ghanaian knocked the ball past two players, surged into the box and struck a shot with just enough power to slip through Diego Mariño’s hands. Atlético were league leaders.

“We’ve got the Yaya Toure of Spain!” a delighted Atleti fan exclaimed to AS just after the win. It’s way too early for those claims yet, but there is something of the Ivorian in the way the young midfielder has driven forward from deep and produced the ideal end product in important moments.

If he keeps that form up, Thomas will soon find he is offered more than just a super sub’s role from the bench. Atlético may even find that they’re in for another special year.