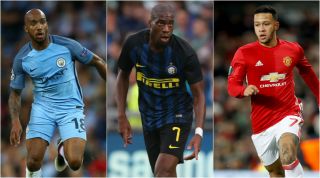 For years, Arsenal fans have implored Arsene Wenger to sign a top-class striker, but the emergence of Alexis Sanchez as a central frontman has negated that need for now. The Gunners should therefore look to strengthen at full-back – particularly as Kieran Gibbs looks set to depart next summer.

Grimaldo, who's enjoying a brilliant breakthrough campaign at Benfica, would fit the bill perfectly. The ex-Barcelona 21-year-old is wanted by the likes of Chelsea and both Manchester clubs, though, so Wenger shouldn't hang around.

After narrowly avoiding relegation in their debut Premier League campaign last time out, Bournemouth are currently flying high in 10th place. Loanee Wilshere has played a big part in their exploits so far this term, fitting in perfectly with Eddie Howe's system at the Vitality Stadium.

If the Cherries want to consolidate their top-flight place, signing a player of Wilshere's standard would be a good start. The midfielder has forced his way back into the England reckoning under Howe and could do a lot worse than signing permanently. Arsenal boss Wenger has suggested they'll offer him a new contract, but would it really be in his best long-term interests?

They've recently confirmed the signing of former Claret Joey Barton, but Burnley seem resigned to a relegation scrap. With that in mind, then, the club should be looking to increase their quota of battlers to aid their fight for survival.

Reading's USA international Williams certainly falls into that category; the former Hoffenheim man is an all-action midfielder who's full of commitment and, at 27, he'll be keen for a chance in the Premier League.

Chelsea are enjoying a fantastic season under Antonio Conte and don't need to strengthen much, but some more young, English talent certainly wouldn't go amiss in west London.

Burnley defender Keane would represent an astute addition: John Terry will surely retire at the end of the season, Gary Cahill can't go on forever, and the former Manchester United man seems ready to make the next step in his career.

Crystal Palace aren't exactly struggling for goals this season, but with Connor Wickham sidelined for the rest of it they could do with some attacking reinforcement.

Mitrovic is currently playing second fiddle to Dwight Gayle at Alan Pardew's former club Newcastle, and would probably welcome a fresh start elsewhere – not least in the top flight. He wouldn't walk into Palace's first team with Christian Benteke around, but the Serb showed last year that he can score goals in the Premier League when the service is right.

Everton's start to the season suggested they could challenge for a Champions League place, but they've faltered of late and now find themselves languishing in mid-table. After they missed out on Moussa Sissoko to Tottenham, fresh blood is needed.

Rumour has it that Ronald Koeman is looking at his fellow countryman Depay for such an injection. The Manchester United star dazzling with PSV in 2014/15 as they won the Eredivisie but hasn't replicated such form at Old Trafford. Still, even Jose Mourinho is sympathetic to the Dutchman. "To be honest, people like Ashley Young and Memphis Depay, I did not really give them a run of matches to play (and) prove themselves," said the Portuguese.

A switch to Goodison Park could be just what Depays needs to get his career back on track – and just what Everton need to climb back up the table.

Hull's season is already looking desperate: they're rock-bottom of the Premier League and have scored the fewest number of goals in the division.

The Tigers can't afford world-class players, so they'll have to take a risk when it comes to a new striker. At the age of 26, Rhodes will be itching to finally prove himself at the highest level, having never truly fulfilled his early potential. Hull could give him the platform to do just that – and Middlesbrough could surely be persuaded to let him go.

Leicester shocked the world when they won the Premier League in 2015/16, but this season has been much tougher. Failing to adequately replace N'Golo Kante has been a key reason for their slump, so finding a successor to the Frenchman should be their first priority next month.

Ndidi would be a sensible choice: the 20-year-old is a natural ball-winner and would presumably jump at the chance to move to the Premier League from Genk – and with Nigeria having failed to qualify for the Africa Cup of Nations, the Foxes wouldn't lose his services. According to reports a deal is close.

The Reds are scoring goals for fun this term, but they're conceding more than a team gunning for the top spot in the Premier League should be. Greater protection for the backline is required, so Kondogbia would be an ideal acquisition in January.

Jurgen Klopp is a big fan of the Inter midfielder and has been linked with him on a couple of occasions in the past. The Frenchman could potentially be the final piece in Liverpool's Premier League-winning jigsaw – and with the managerial instability at Inter, he'd probably be up for the task.

Manchester City's weakness lies in their defensive unit, which has been taken apart by Chelsea and Leicester in the last few weeks. Van Dijk would tighten up that backline significantly; given that he's already proved himself in the Premier League with Southampton, his signing would represent a no-brainer.

The ex-Celtic stopper could be the long-term replacement for the injury-prone Vincent Kompany, while his reliability would be welcome to attone for John Stones's unpredictability.

After a rocky start, Jose Mourinho finally has Manchester United looking like a force again. With the likes of Zlatan Ibrahimovic, Anthony Martial and Marcus Rashford they're well-equipped up top, so defensive reinforcements will probably be top of their manager's wishlist.

Step forward De Vrij. Mourinho is reportedly a fan of Lazio's Netherlands international who, at 24, has not even reached his prime yet.

It was thought that Boro might go back in for Borussia Dortmund centre-back Neven Subotic after a summer move broke down at the medical stage, but the Teessiders don't really need defensive reinforcements with Calum Chambers now on loan at the Riverside.

Instead, they might need to strengthen up front with the future in mind: Jordan Rhodes could move on soon, David Nugent is 31, Cristhian Stuani 30 and Alvaro Negredo only on loan from Valencia. Villarreal's Bakambu could be a decent long-term bet: at 25, the Congolese striker is a good age and thumped in 22 goals for the Spaniards last season as they reached the Europa League semi-finals. Injury has contributed to a slow start this term, but he'd likely be a relatively inexpensive and useful squad player.

Southampton have cemented themselves as a top-half Premier League side in recent years and should now be looking to sign players who can take them to the next level.

Porto striker Silva, who's reportedly interesting the Saints and a number of other Premier League clubs, would be an excellent signing for Claude Puel's side. The 21-year-old Portugal international is one of the hottest prospects in European football and recently tore Leicester apart in the Champions League. With 15 goals in 25 games this season, he's hot property.

Stoke need to add goals if they're to ever improve on ninth place, and Wilfried Bony has failed to impress following his loan switch from Manchester City.

Berahino, who's out of contract in the summer and will surely be available for a reduced fee in January, could be the answer. Question marks about his attitude remain, but the 23-year-old is a fine finisher and could thrive in the Potteries. He really needs a fresh start.

Sunderland look to have finally turned a corner following their disastrous start to the campaign, but they're not out of the woods yet.

Jermain Defoe guarantees goals, but the Black Cats really need to stop shipping them at the other end. A no-nonsense centre-back like Skrtel would add solidity to the backline, and the ex-Liverpool player's experience would be invaluable in a relegation scrap.

Swansea need to take drastic action in January if they're to avoid demotion, and proven Premier League talent – if only on loan – is the safest option.

Young has struggled for playing time at Old Trafford and would likely be keen on a loan move, while his speed, trickery and crossing ability on the flanks would add some much-needed creativity to the Swans' ranks.

Mauricio Pochettino has done a fine job at White Hart Lane, but Spurs' lack of depth has arguably held them back this season.

Isco could be the world-class game-changer they need. The Real Madrid attacking midfielder would be a real statement signing and could help Tottenham to become regular title challengers – but convincing him and los Blancos would be a huge hurdle.

Watford are quietly consolidating themselves as a mid-table Premier League outfit, but it's important that they continually upgrade their squad.

One player who would add plenty to the side is Mikel, who's out of favour at Stamford Bridge and has been for some time. The Nigerian would bring steel and experience to the Hornets' midfield, although Marseille are also thought to be interested.

10 players who Chelsea could realistically target in January

West Brom are having an impressive season by their standards, but their squad is extremely thin and they'll undoubtedly be looking to add to it in January. The quality of player they target should be higher than usual given their improvement, with Delph one man who they should their eyes on.

The ex-Aston Villa midfielder looks certain to depart the Etihad Stadium in the near future, although Tony Pulis will be looking for assurances about his fitness before striking a deal.

West Ham have underwhelmed so far this season and need to ensure they're not sucked into the relegation battle in the New Year.

Sturridge, who's now third-choice centre-forward at Liverpool behind Roberto Firmino and Divock Origi, would ensure they avoid any sort of battle at the bottom. A loan deal would make sense for both the Hammers and England international, but the Reds may prefer to keep him at Anfield as they battle for the championship.