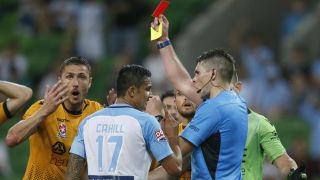 Melbourne City were held 3-3 by Perth Glory on Tuesday in one of the most entertaining A-League fixtures of 2016.

The home side took the lead three times only to be pegged back by the visitors on each occasion in an enthralling contest at AAMI Park.

Bruno Fornaroli scored twice for City after Tim Cahill's early goal but also missed two of his three penalties in the 90 minutes, including one in second-half injury time that followed straight red cards for Dino Djulbic and Fernando Brandan.

Diego Castro hit a double for Glory and Chris Harold grabbed the final equaliser to deny City the chance to climb above rivals Melbourne Victory into third in the table, while the visitors remain six points further back in sixth.

Cahill's emphatic header after nine minutes put City in front but Castro levelled from close range before the midway point of the half.

Brandon Wilson and Alex Grant missed good chances for the visitors before Fornaroli curled a delightful finish into the top corner of Liam Reddy's goal to restore City's advantage.

Three penalties. Two penalties saved. Two goals each from Fornaroli and Castro. Points shared in Melbourne. What. A. Game. December 27, 2016

Fornaroli had the chance to extend the lead two minutes later from the spot but his powerful effort was beaten away by Reddy and, barely 30 seconds later, the ball was in City's net as Castro cut inside and fired into the bottom corner following a counter-attack.

The second half started at a slower pace but burst into life just past the hour mark when Marc Warren conceded his second penalty of the game - this time for handball - and Fornaroli made no mistake as he rolled a cool effort into the bottom-right corner.

Glory were not to be discouraged, however, and AAMI Park was silenced three minutes later as Harold's dummy sat Dean Bouzanis on the turf before he lifted the ball over the goalkeeper and into the top corner from the right.

Both sides missed good chances for a winner before City won their third penalty of the match after Djulbic kicked out at Brandan following a contested header before striking him with his knee as he struggled to his feet, earning a red card.

After lengthy consultation with his assistants, referee Shaun Evans sent off Brandan - who had kicked Djulbic in return - but allowed the penalty decision to stand, but Reddy guessed right once more to keep out Fornaroli's effort from the spot and ensure the spoils were shared.

The result means City could only close to within 11 points of leaders Sydney FC, who thrashed bottom-club Adelaide United 4-0 on Monday thanks to an Alex Brosque double and a goal each for Filip Holosko and Rhyan Grant.

Glory are level on points with Newcastle Jets, who twice came from behind to draw 2-2 at home to Wellington Phoenix.