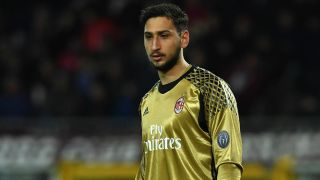 AC Milan have urged Gianluigi Donnarumma to make a decision over a contract renewal soon as uncertainty grows over the 18-year-old's future at San Siro.

The goalkeeper's existing contract is due to expire in June 2018 and no agreement has yet been reached over a new deal.

A number of clubs are keeping a close eye on Donnarumma's situation and Milan general director Marco Fassone has told the youngster to make up his mind as the Rossoneri prepare for next season.

"Donnarumma is a cornerstone and a foundation for next season. We have told him this right from the first time we met for talks," Fassone told Mediaset.

"I can see a willingness to stay in his eyes, but we cannot afford to just sit back and wait for him to make a decision. We need to give Vincenzo Montella his squad for next season on July 3. Our time is more pressing than that of his agent Mino Raiola.

"I am convinced that our offer and our plans with him are good, but we will have to activate a back-up plan if he does not want to renew."

Donnarumma made 38 Serie A appearances in 2016-17, keeping 12 clean sheets in the process.