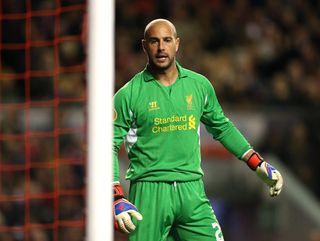 Aston Villa will have to wait to secure the services of Pepe Reina while AC Milan seek to find a replacement, according to the goalkeeper’s agent.

Following the recent season-ending ACL injury to Tom Heaton, and with back-up Jed Steer facing at least another two months out as he recovers from a calf injury, boss Dean Smith has made the recruitment of a goalkeeper one of his priorities this month.

Smith still has a further three international goalkeepers on his books in Norway’s Orjan Nyland, Croatia’s Lovre Kalinic and Matija Sarkic of Montenegro, who was recalled from his loan at Livingston after Heaton’s injury.

Yet Smith is close to luring former Liverpool number one Reina back to England following negotiations with the Rossoneri this week.

As back-up to Gianluigi Donnarumma, manager Stefano Pioli has made it clear to agent Manuel Garcia Quilon, following the latest round of talks, that Reina will only be allowed to leave once another goalkeeper is in place.

Speaking to Sky Italia, Quilon confirmed: “There’s no agreement. We continue to negotiate, but the Rossoneri would like to bring in a replacement first.”

It is understood the deal in place for Reina is a short-term six-month contract, with a year extension should Villa retain their place in the Premier League.

At present, Smith’s side are one place and one point above the relegation zone.