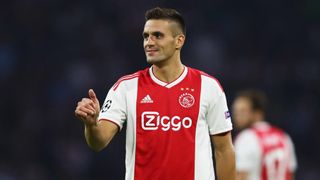 Ajax booked their place in the Champions League knockout rounds with a 2-0 win at 10-man AEK Athens in a match that was marred by violent clashes in the stands.

Alarming images emerged before kick-off of individuals throwing flares and petrol bombs at the visiting Dutch fans, although no injuries have yet been reported.

The Eredivisie side knew victory would secure their progression from Group E and they sealed the deal thanks to Dusan Tadic's second-half double, the first a spot-kick that saw Marko Livaja receive a second yellow for handball.

Erik ten Hag's men could yet snatch top spot after temporarily edging a point ahead of Bayern Munich, who are in action against Benfica later on Tuesday and still have to travel to Amsterdam in the final round of fixtures.

Initial events on the pitch were less dramatic than those off it with the lone chance of an uneventful opening 30 minutes falling to David Neres, but the winger's header from Frenkie de Jong's dinked pass was tame.

Lasse Schone next dipped a free-kick marginally over the crossbar, while Ezequiel Ponce's poor touch scuppered a rare AEK opening late in the first half.

Though largely outplayed, the hosts continued untroubled until Livaja - who had been booked for a foul 15 minutes earlier - was adjudged to have handled Schone's free-kick in the 68th minute.

The attacker was given his marching orders and Tadic broke the deadlock from the spot, before the former Southampton winger wrapped up a serene result by tucking away substitute Klaas-Jan Huntelaar's unselfish lay-off 18 minutes from the end.

What does it mean? Ajax in contention for top spot

Ten Hag's team, now unbeaten in five group-stage games for the first time since 2002-03, must be quietly confident of beating an out-of-sorts Bayern to Group E leadership when the Bundesliga champions visit in December.

Their head-to-head record is finely poised following a 1-1 draw earlier in the tournament.

It will be a treat to observe how Ajax defender Matthijs de Ligt handles the do-or-die knockout rounds. The teenager's combination of leadership, aggression in the tackle and class on the ball - all on show in Athens - is remarkable for a player of his young years.

Alef out of his depth

Against a group of contemporaries, 23-year-old midfielder Alef struggled to exert much influence on proceedings. He attempted just 12 passes in the first half and it was something of a surprise to see him remain on the pitch for the full 90 minutes.

Both clubs have two domestic matches to come before their next European engagements, as AEK head to Benfica and Ajax entertain Bayern.