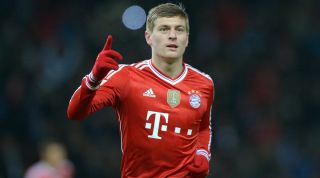 Reports this season have suggested the 24-year-old playmaker could leave the Allianz Arena, with Premier League side Manchester United – who take on Bayern in the second leg of their Champions League quarter-final on Wednesday – touted as a likely destination.

“For months we’ve been hearing all kinds of rumours, and we won’t comment on them,” he told Bild.

“But currently I believe that Toni will stay at Bayern at least until 2015.”

Kroos has made 46 appearances in all competitions this season, racking up three goals and 11 assists. The midfielder is under contract at the Bundesliga giants until summer of 2015.