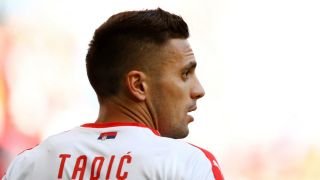 Ajax have completed the signing of Southampton forward Dusan Tadic after agreeing an initial €11.4million deal with the Premier League side.

Tadic moved to England four years ago after making his name in the Eredivisie with Twente and has scored 23 goals for the Saints in 162 appearances in all competitions.

He found the back of the net six times in 2017-18 as Southampton narrowly avoided relegation, Mark Hughes masterminding the great escape after replacing Mauricio Pellegrino.

The 29-year-old has signed a four-year deal at the Johan Cruyff ArenA and immediately fills the void left by Justin Kluivert's departure to Roma.

"The arrival of Dusan Tadic means a considerable improvement to the quality of our selection," said director of football Marc Overmars.

"He can be used in multiple positions, both in midfield and in attack.

"His experience is also important for the many young talents we have in the squad. He is a winner and you always like having that type of player."