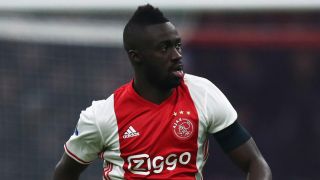 Ajax have offered Davinson Sanchez a new contract amid reports Tottenham are confident of completing a move for the Colombia centre-back.

Speculation has indicated Spurs are nearing a £35million deal for Sanchez as they seek to make their first signing of the transfer window.

But it has now been claimed that a €40m bid for Sanchez has been rejected by the Amsterdam club, who are looking to tie him down to fresh terms.

"Ajax has made Davinson a top offer for a new contract," Ajax director of football Marc Overmars said in quotes reported by De Telegraaf.

Sanchez made 45 appearances in all competitions last season with Ajax, as they missed out on the Eredivisie title by a point and lost the Europa League final to Manchester United.