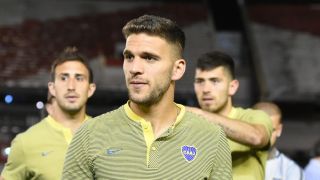 Ajax have completed the signing of Boca Juniors defender Lisandro Magallan on a four-and-a-half-year contract.

Since making his Boca debut in 2013, and following two loan spells away from the club, Magallan has established himself as a regular thanks to his bravery, aerial strength and good close control.

His performances in the Superliga and Copa Libertadores have brought attention from Europe, with Ajax emerging as the favourites to sign the player in May.

A switch did not materialise at that time, but Ajax moved quickly to secure the 25-year-old's services once the January transfer window opened - the four-time European champions reportedly agreeing a €9million deal.

Magallan– who was linked with Manchester City earlier in his career – won three league titles with Boca and featured in both legs of the 2018 Copa Libertadores final against River Plate.

He will join Ajax's squad on their mid-season break in the United States, where they are participating alongside Eintracht Frankfurt, Flamengo and Sao Paulo in the Florida Cup.

His Eredivisie debut could come against Heerenveen on January 20, with Ajax sitting second in the table at the halfway stage, two points behind leaders PSV.