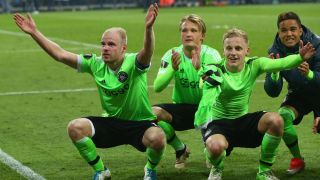 The Amsterdammers have included teenagers Matthijs de Ligt and Kasper Dolberg in their line-up, with players such as Andre Onana, Davinson Sanchez, Jairo Riedewald and Bertrand Traore all 21 or younger.

Danish midfielder Lasse Schone is the only player in the Ajax XI to have already passed the 30-year mark.

There are few surprises in Jose Mourinho's United line-up. Marcus Rashford starts up front, flanked by Henrikh Mkhitaryan and Juan Mata, with captain Wayne Rooney, Anthony Martial and Jesse Lingard all on the bench.

Daley Blind features from the start in defence, taking on his boyhood club in their first European final since 1996.

Sergio Romero receives the nod between the sticks as expected, with the Argentine deputising for first-choice goalkeeper David de Gea throughout the Europa League season.