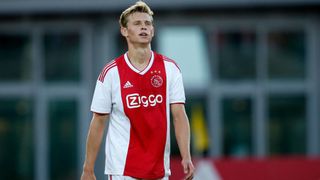 Barcelona have been warned that not even an "insane amount" of money will persuade Ajax to sell youngsters Matthijs de Ligt and Frenkie de Jong.

Ajax boast a squad full of highly rated young players and every year have to contend with rumours linking them with moves away.

De Ligt, De Jong and Donny van de Beek are the latest subjects of such speculation, with Barcelona reported to be eagerly tracking two of the Dutch club's prized assets.

The LaLiga giants have been suggested as a possible landing spot for centre-back De Light, who broke into the Ajax first-team squad at 16 and made his Netherlands debut a year later.

De Jong, a 21-year-old midfielder, is said to be the more interesting option of the two for the Catalans this year, but Ajax's sporting director Marc Overmars – who played for Barcelona in his career – has told his former club to look elsewhere for reinforcements.

When asked about the rumours swirling around De Jong, Overmars told De Telegraaf: "He is not for sale, and I have communicated this to all parties involved.

"It's the same for Matthijs. Clubs that are interested are free to come back next year.

"Of course, Davinson Sanchez's move [to Tottenham] last year showed that it is not always easy to stand firm.

"But we have now reached a point where we simply say that we are not selling these players. They are still only 19, 20 years old.

"I have told these players and their agents that a transfer after this season could be an option if the right offer comes in.

"Frenkie de Jong, Donny van de Beek and Matthijs de Ligt are not for sale as far as we are concerned, not even for an insane amount. They should play about 40 games for Ajax first in 2018-19."