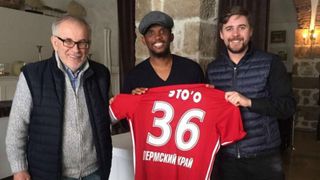 Antalyaspor striker Samuel Eto'o says the Amkar Perm shirt he was pictured holding was merely a gift from the club for his 36th birthday.

The veteran forward sparked rumours that he could be set to return to the Russian Premier League after he was picture holding a club jersey with the number 36 under his name.

Eto'o, was stood alongside Amkar coach Gadzhi Gadzhiyev, who he played under during his previous spell in Russia with Anzhi Makhachkala from 2011 to 2013, and executive director Denis Maslov.

However, former Barcelona, Inter and Chelsea star Eto'o, who has six goals in 15 Turkish Super Lig appearances this term, explained that the shirt was a present.

The captain was accompanied with several crying face and balloon emojis.