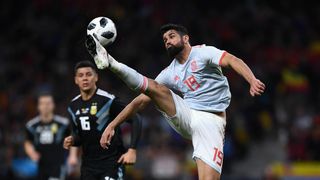 Messi was absent due to injury as Spain thrashed Jorge Sampaoli's men 6-1 in Madrid on Tuesday, inflicting the joint-worst defeat in Argentina history.

Costa opened the scoring for Spain, with Real Madrid midfielder Isco adding his first international hat-trick in a comprehensive win.

Despite countless trophies at Barca and five Ballons d'Or, international success continues to elude Messi, who was on the losing side in the last World Cup final and has been a beaten Copa America finalist on three occasions.

Costa felt Argentina missed Messi badly during their humiliating defeat at Atletico Madrid's new home, with Spain playing at the Wanda Metropolitano for the first time.

"You have to do an analysis in all aspects," Brazil-born Costa said of Messi. "The Argentines criticise Messi a lot, but you can tell that when Messi is not there, they are something else.

"A player like Messi should not be criticised. You should thank God that he's there. Messi must always be treated well. Even if he plays a bad game with the national team, having him on the field makes a difference."

6 - Diego Costa has scored six goals in his last six games for Spain as starter, all of them from inside box. Bull March 27, 2018

Costa was withdrawn at half-time, his replacement Iago Aspas impressing with a goal and an assist to make his case for World Cup selection.

But the Atletico striker, who has scored six times in his last six starts for his country, is ready to battle for his place having returned from a brief international exile during a period of unrest at Chelsea and hit his first Spain goal since June.

"During the nine months I went without being called up by Spain I felt bad," Costa said. "I went six months without playing, as you all know, but I knew that if I started playing again I would have a chance of returning. And I'm happy to be here.

"It's a nice fight that we have [for World Cup selection] and it's important that if you are called on to play you can score and help the team. There's two months to go and if I do well the normal thing would be that they call me up. I'll do everything I can to be there.

"This national team wants to do something great again. There is a good team for the World Cup."

Costa sustained a heavy knock to the shin in the process of scoring his goal on Tuesday after colliding with Argentina goalkeeper Sergio Romero, but he is confident he will be available to face Deportivo La Coruna in LaLiga on Sunday.

"I think I will surely be fit to play Sunday," Costa added. "I took a blow, I'll put ice on it and that's all."