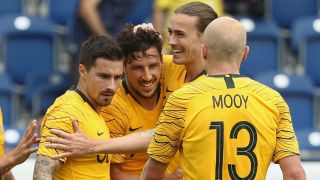 Australia claimed an impressive 4-0 win over Czech Republic in their first World Cup warm-up match, with Mathew Leckie getting a brace and Andrew Nabbout justifying his selection in attack by scoring his first international goal.

The Socceroos had been dealt the blow of losing first-choice striker Tomi Juric to injury and some supporters were critical of Nabbout's selection in the initial squad ahead of Hibernian's Jamie MacLaren, but the Urawa Reds man repaid Bert van Marwijk's faith as Australia cruised in Austria.

It took the Socceroos a little while to get going at the NV Arena in St. Polten, but they finally came to life upon taking the lead 32 minutes in – Leckie tucking in from close range.

From then on, Australia looked considerably more dangerous in attack than their European counterparts, who showed little to suggest their World Cup qualification failure was a fluke.

Nabbout made it 2-0 early in the second half, providing a fierce finish a few moments before being withdrawn, with his mission seemingly accomplished.

Leckie got his second 18 minutes from time, before a late Jakub Jugas own goal saw Australia clinch a victory which suggests they are in good shape with just one more preparation game scheduled before facing France in Kazan in their World Cup opener on June 16.

The Czechs controlled possession during the opening stages and played some neat football, though it took them until the 21st minute to first threaten the Australia goal.

Vladimir Darida's driven corner caused Australia problems and found its way through to the far post, where Antonin Barak inexplicably sliced over from close range.

Van Marwijk's men eventually sparked into life just after the half-hour mark, taking the lead against the run of play with their first shot on target.

Josh Risdon crossed from the right flank to Robbie Kruse at the back post and he squared a first-time ball that bounced over Jugas to leave Leckie with the simplest of tap-ins.

They went close again two minutes later – Leckie picking out Aaron Mooy in the left side of the area with a long diagonal ball, before the Huddersfield Town man teed up Tom Rogic for a half-volley which he struck straight at the grateful Tomas Koubek.

Australia doubled their advantage eight minutes after the restart, as Nabbout ran at Tomas Kalas, jinked on to his right foot and found the bottom-left corner from just inside the penalty area.

Leckie put the game beyond the hapless Czechs in the 72nd minute, cutting inside from the right and seeing a left-footed effort squirm past the unimpressive Koubek at his near post.

Things got even worse for Karel Jarolim's men with 10 minutes to go – Jugas turning in Milos Degenek's low cross into his own goal, as Australia held on for a morale-boosting triumph.