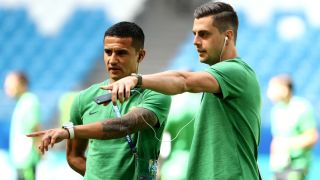 Tomi Juric hopes Australia can show more of a clinical edge in their crucial final World Cup group game against Peru on Tuesday.

The Socceroos kept their hopes of a spot in the last 16 alive with a 1-1 draw against Denmark on matchday two, but they are undoubtedly facing an uphill task.

They are three points behind Age Hareide's side, who sit a further two adrift of Group C leaders France, and Denmark only need to avoid defeat to Les Bleus to follow them into the knockout phase.

Both of Australia's goals in Russia have come from Mile Jedinak penalties and Juric admits a better attacking display against Peru in Sochi would aid their chances of going through.

"The most important thing for us is to get the result," Juric, whose side must win to have any chance, told a news conference. "We need the other result to go in our favour, so it's the main point and talking factor.

"If we score goals and we win the game, then it doesn't matter how we score. It's just important we get the result, but obviously it's something we might need to work a bit more and have a bit more confidence in the final third to finish things off."

Peru will be heading home after Tuesday's game, with defeats to France and Denmark in their first two games meaning they cannot now progress to the next phase.

But Edison Flores hopes to give their vibrant travelling support something to cheer before they depart Russia, even though he expects a tough test against Australia.

"They're a team that have surprised me a lot," he told FIFA TV. "They have very fast players, very balanced both in defence and attack.

"Against Denmark, they achieved a valuable tie that still leaves them with a chance to reach the next round, but we will give our best effort to say goodbye with a victory."

“We need to stick together if we want to go far in this tournament” Meet ’ Daniel Arzani, the youngest player at this year's June 21, 2018

If 19-year-old Arzani is to be unleashed, now is the time to do it. The Melbourne City forward is one of Australia's most exciting young players for some time and his pace and trickery could be key to any hope of a more attack-minded performance.

With Jefferson Farfan not fully fit and Paolo Guerrero yet to fire, Benfica winger Carrillo is Peru's best bet to get their first goal of these finals. If Bert van Marwijk does consider a more attacking Australia line-up, Carrillo's speed could be a ruthless weapon on the break.

- This will be the first ever encounter between Australia and Peru.

- Australia have picked up just one point and scored just one goal against South American teams in World Cup group stages (three games in total).

- Australia have kept just one clean sheet in their 15 previous World Cup games (0-0 vs Chile in 1974), conceding at least once in each of their last 12 matches.

- Peru have had 27 shots so far at this World Cup, but are yet to score a single goal.

- Mile Jedinak has scored both of Australia's goals so far in the 2018 World Cup. No Australian has ever scored more in a single edition before (Tim Cahill two in 2006 and 2014, Brett Holman two in 2010).