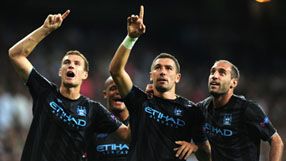 After going out in the group stage last season, City's expensively assembled squad have failed to light the touch paper in this year's competition and occupy third place in Group D with a solitary point from their opening two games.

Manager Roberto Mancini could point to the fact his team have already faced the champions of Spain and Germany in the toughest of the eight groups.

But there will be no excuses if his side come home empty-handed from Wednesday's encounter with Ajax who are bottom having lost their first two matches.

For a team that has been hand-picked by a manager given almost infinite resources, City have underwhelmed in Europe's elite competition.

Since making their Champions League debut last season they have lost three of their four away games and went down 3-2 to Real Madrid last month in their first road trip of this campaign.

Mancini's principal headache will be deciding who to play up front after Edin Dzeko, who has been used mostly as an impact substitute this season, came off the bench on Saturday to rescue his team with two goals in a 2-1 win over West Bromwich Albion.

The Bosnian could feel aggrieved to be kicking his heels on the sidelines with question marks still hanging over temperamental Italian Mario Balotelli.

Despite only starting twice in the Premier League and once in Europe, Dzeko already has six goals this season compared to Balotelli's one.

"Edin's been in superb form, not just in terms of goal-scoring but at the end of last season and at the start of this season, coming off the bench or starting, he's been excellent," assistant manager David Platt told City's website.

"People should be disappointed when they're left out but the reaction that you want is that if they come on they fight."

City have never lost to a Dutch team in three previous fixtures, all against Twente Enschede.

On their only visit to the Netherlands they drew 1-1 with Twente in the 1978/79 UEFA Cup first round.

The English Premier League champions will be boosted if playmaker David Silva can recover in time from a hamstring injury sustained on international duty.

The clever Spaniard was starting to rediscover his sparkling form of last season before being injured in last week's 1-1 World Cup qualifying draw with France.

Ajax will be short on confidence having endured a miserable October.

Frank de Boer's team kicked off the month with a 4-1 home defeat against Real Madrid and in the Dutch league his young side have twice given away leads to draw against mid-table opponents.

"It all has to do with adjusting the team to new young players," said De Boer. "We have to start again but we are really good at that."