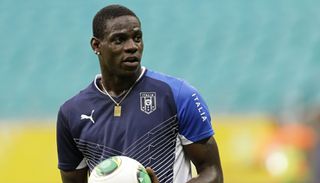 "The examinations carried out this afternoon in Fortaleza on Mario Balotelli showed a grade-one tear in the quadriceps muscle of the left leg," it said in a statement.

"The player will not be available for the semi-final against Spain on Thursday, June 27 and in the coming days his condition will be evaluated for the match on the 30th (either the final or third-place play-off)."

Balotelli, who left Manchester City for AC Milan earlier this year, has scored twice for Italy in the tournament, and would have been expected to once again lead his side's attack in Fortaleza against the world and European champions.

Italy coach Cesare Prandelli hopes to have playmaker Andrea Pirlo available after he missed Saturday's 4-2 defeat to hosts Brazil in the final Group A game with a sore calf.

Brazil take on Uruguay in the other semi-final on Wednesday.