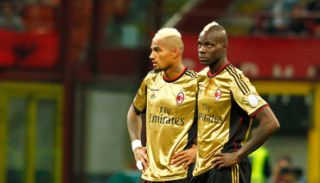 "Everyone is free to express their own opinions but there are rules. Whoever leaves the field to make a protest, without warning the referee or without being substituted will be sent off," Nicchi told Italian news channel SkyTG24 on Friday.

"Less importance has to be given to this phenomenon as a media event and more importance from what can be done realistically, be tough and uncompromising with the idiots who sing these shameful chants."

Earlier this week, Balotelli said he would leave the field if he was racially abused by fans again, after being repeatedly being targeted by opposition fans in Italy.

"If it happens one more time, I'm going to leave the pitch, because it's so stupid," he said.

AS Roma supporters were the latest to shout monkey chants at him during their goalless draw with AC Milan on Sunday, which was suspended for two minutes by referee Gianluca Rocchi while players and the stadium announcers tried to halt the abuse.

"I was about to leave the pitch on Sunday but they are going to think that I wanted to leave because maybe we had some difficulty with the game," the Italy striker added.

"I said it's better we play and then we talk, but if it wasn't for this reason I was going to leave the pitch."