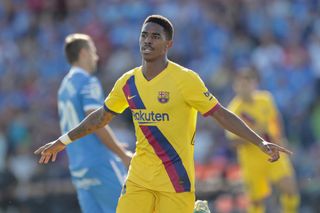 Barcelona shrugged off the absence of Lionel Messi to win 2-0 at Getafe and claim their second straight win in LaLiga.

Goals from Luis Suarez and Junior Firpo proved enough for the visitors but Clement Lenglet was sent off late for a second bookable offence.

The loss of Lenglet is another blow for under-pressure Barca boss Ernesto Valverde, who saw his side make hard work of the trip to opponents who had started without a win in four.

Messi was missing after an aborted comeback attempt from a thigh strain in the midweek win over Villarreal, which came to an end at half-time.

The hosts dug in early with Angel Rodriguez firing the first real chance high and wide of the target as Valverde’s men struggled to get into their stride.

Carles Perez saw the visitors’ first chance comfortably saved by Getafe goalkeeper David Soria, then Suarez missed a golden opportunity when he burst through one-on-one but dragged his shot wide.

The tension was evident in Barcelona’s game and they were almost made to pay in the 21st minute when Marc-Andre Ter Stegen had to make an unorthodox save to deny Angel with his feet.

Suarez missed again just before the half-hour mark as the hosts continued to hassle and frustrate their opponents, whose average start to the campaign has caused some degree of discontent.

The opener four minutes before the break was hardly classic Barca as Suarez raced onto a long Ter Stegen boot up field and lobbed Soria to put his side one up.

Suarez could have extended Barca’s lead on the stroke of half-time after being played in by Perez but his missed chance signalled a frustrating end to the half.

Firpo eased the pressure four minutes into the second period when he poked his side’s second through Soria’s legs, after the keeper had parried Perez’s initial effort into his path.

And while the visitors’ lead seldom looked in danger, the pressure remained as the game was reduced to a scrappy and occasionally short-tempered affair.

Lenglet’s fine challenge denied a chance for Jaime Mata but it was mostly Barca who looked likely to grab a third, with Suarez and Perez again both coming close.

Lenglet’s dismissal eight minutes from time was another setback from Valverde, who must add the French defender to his lengthening list of absentees for next week’s crucial clash with Sevilla.

Getafe looked to seize on their numerical advantage with Angel heading over the crossbar two minutes later, but Barca would ease home with three points and a clean sheet.