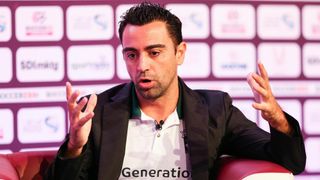 Zinedine Zidane's side won 4-1 at Balaidos on Wednesday to move three points clear of Barca at the top of the table ahead of the final round of matches on Sunday.

A point against Malaga at La Rosaleda will be enough for Madrid to secure a first league triumph since 2012, although Barca will hold out hope for a similar shock to that of the 1991-92 season, when Tenerife beat Los Blancos to allow the Catalans to snatch the title.

But Xavi, who won La Liga eight times during a glittering Barca career, accepts that Madrid are unlikely to let the trophy slip from their grasp this time.

"It's very difficult for La Liga to escape Madrid. They're very strong," the Al Sadd midfielder told AS. "They have [Toni] Kroos, [Luka] Modric, Isco... players that I like a lot.

"The key game was the one in Vigo and they still won it. Hopefully they lose at Malaga and Barca are champions, but it's tough, frankly.

"Malaga are at a good moment in their season and to win there will be very tough. They have to produce a miracle like Tenerife did so that Barca win La Liga.

"Defeats [for Barca] like Alaves at home and Deportivo La Coruna away carry a heavy toll and only at the end of the season can you weigh up the overall campaign."

Madrid are on course for a league and Champions League double, with Zidane's side bidding to become the first to defend the trophy in its modern format when they meet Juventus in the final on June 3.

"Juventus are very good, too. They're a great side. They've already shown that by knocking out Barcelona and producing a great defensive display," he said.

"I think the final is 50-50. The other day, I heard that Buffon has never won the Champions League. He deserves to win it and the Ballon d'Or."