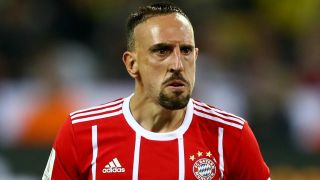 Franck Ribery would like to retire at Bayern Munich but admits he is still tempted to move away from the Bundesliga champions before the end of his career.

The 34-year-old has enjoyed spectacular success since signing from Marseille in 2007, winning seven Bundesliga titles, five DFB-Pokals, the Champions League and the Club World Cup among a host of honours.

Ribery has struggled with injury over the last couple of seasons but has started 2017-18 in strong form, helping Bayern to claim the DFL-Supercup on penalties against Borussia Dortmund before a DFB-Pokal triumph at Chemnitzer and Bundesliga wins over Bayer Leverkusen and Werder Bremen.

The winger says he would happily finish his career at the Allianz Arena but cannot shake the idea of trying his luck abroad after a decade in Germany.

"I want to win the Champions League once again. That is my dream. That is my adrenaline, my motivation," he told Bild.

Feliz aniversário !  Already six years with you now, glad I found such a good friend in you! always stay the same bro  September 7, 2017

When asked if another European triumph would see him call time on his career, he replied: "I can't say if that's my last season. I am fit and healthy. I can play two, three more years. I love football. I don't want to sit at home, I want to play.

Ribery insists he has a good understanding with head coach Carlo Ancelotti when it comes to managing his game time.

"I always want to play. I am always hungry, I always want to win. But I know by now that I sometimes need a break. I can understand being benched after three or four games," he said.

"We have a good relationship. We are straightforward. If we have to talk, we talk. Calm, normal. If he wants to tell me that he wants to bench me the next day, he approaches me."