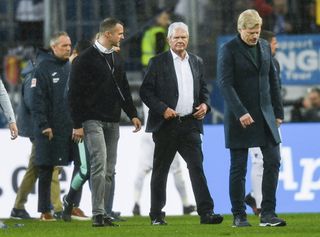 Bayern Munich’s 6-0 win at Hoffenheim ended in bizarre fashion as the two teams played out time following a delay caused by an offensive banner in the away end.

The Bundesliga leaders had raced into a 3-0 lead inside 15 minutes with goals from Serge Gnabry, Joshua Kimmich and Joshua Zirkzee.

Philippe Coutinho scored either side of half-time, with substitute Leon Goretzka slotting in a sixth just after the hour mark – but it was all overshadowed by the events which followed.

In the 77th minute, visiting Bayern fans unfurled an offensive banner aimed at Hoffenheim owner Dietmar Hopp, the billionaire software entrepreneur who has bankrolled the club’s rise to the German top flight.

With the game having been twice suspended by the referee, Bayern players and staff – including manager Hansi Flick – went over to remonstrate with the supporters to remove the flag.

Eventually, the players were taken off the field for a lengthy stoppage and when they came back out, both teams proceeded to pass the ball around at a slow pace, with goalkeepers coming up towards the centre circle as the clock was run down.

Bayern Munich said in the match report on the club’s official website that the display of solidarity was made “to take a decisive stance”.

Following the final whistle, both sets of players and management – including Bayern chief executive Karl-Heinz Rummenigge – came together in front of the home fans as a show of collective support for Hopp.

Despite the bizarre ending to the match, the convincing victory saw Bayern move four points clear of RB Leipzig, who play on Sunday.

Rummenigge later apologised on behalf of the club for the actions of the Bayern supporters.

“I am deeply ashamed for the behaviour of these people. The moment has come when all of German football must act together against this chaos. It is the ugly face of football,” Rummenigge said, quoted on Bayern’s official website.

“I am deeply ashamed for Dietmar Hopp, who is a very fine man of honour and made sure that not only football, but all sport in this region got a positive face. I also apologised to him.

“There is no excuse for this. We have had the incidents filmed and intend to hold the people accountable who have deeply discredited FC Bayern today.”

Rummenigge added: “Football is a wonderful game that we all enjoy, but when I experience something like today, I am shocked and no longer have fun.”