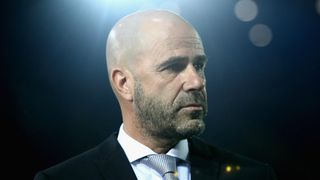 Borussia Dortmund head coach Peter Bosz is aware his side must beat APOEL to keep their Champions League hopes alive on Tuesday.

Bundesliga leaders Dortmund are away to APOEL in Nicosia, having lost their opening two Group H fixtures.

Dortmund are already six points adrift of two-time defending champions Real Madrid and Tottenham, while APOEL are also in the same position.

Beaten by RB Leipzig in the Bundesliga last week, Dortmund have been boosted by the inclusion of captain Marcel Schmelzer.

Schmelzer suffered an ankle injury against Freiburg on September 9, however, the 29-year-old made the trip to APOEL with his Dortmund team-mates.

"The fact that we brought Schmelle with us shows that he could well play," Bosz said. "The question is just whether he's able to start."

Schmelzer added: "We've not made a good start to our Champions League campaign and we absolutely want to win the match.

"We're aiming to win the two matches against APOEL. This would mean we'd be under less pressure."