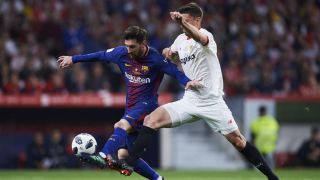 Barcelona have completed a deal to sign highly rated French defender Clement Lenglet from Sevilla for €35.9million, with the player set to sign a five-year contract.

Lenglet, 23, had long been identified as a target for Barca, with reports linking them with a move for much of the 2017-18 season.

The defender made the switch to Spain in January 2017, leaving Nancy – for whom he was captain – and seamlessly fitting into Jorge Sampaoli's team.

Even after Sampaoli's departure, Lenglet continued to be a mainstay under Eduardo Berizzo, Vincenzo Montella and Joaquin Caparros last term, featuring 35 times in LaLiga.

Barca reportedly stepped up their pursuit upon the conclusion of last season and were said to be eager to avoid paying Lenglet's release clause, which was rumoured to be in the region of €35million.

But Sevilla held firm, with director of football Caparros and president Jose Castro insisting on numerous occasions they were unwilling to negotiate with Barca, telling them to pay the release clause or forget about Lenglet.

He becomes the fifth centre-back in Barca's first-team squad, but Thomas Vermaelen, Samuel Umtiti and Yerry Mina have all been the subjects of transfer speculation.