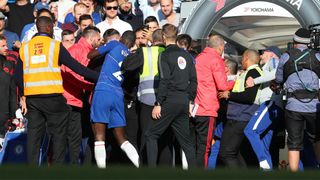 The Football Association (FA) has charged Chelsea's second assistant coach Marco Ianni with improper conduct following an altercation with Jose Mourinho and reminded the Manchester United manager of his responsibilities after their touchline row.

The Chelsea coach celebrated the goal wildly in front of the United dugout leading to a furious reaction from former Blues boss Mourinho, who had to be held back by stewards.

Play was eventually able to resume after a further fracas in the centre circle of the pitch.

Mourinho confirmed post-match that Chelsea boss Maurizio Sarri had ensured Ianni apologised for his role in the incident.

But the FA announced on Monday that Ianni has been charged with improper conduct, with the coach given until 6pm on Thursday to respond.

"In relation to this incident, Jose Mourinho has been formally reminded of his responsibilities whilst both clubs have received similar official reminders in terms of the behaviour expected of their staff and players at all times whilst in the technical area," the FA said in a statement.

[1/2] Chelsea coach Marco Ianni has been charged following the game against Manchester United on Saturday [20 October 2018]. It is alleged that his behaviour in the 96th minute constituted improper conduct. He has until 6pm on Thursday 25 October 2018 to respond to the charge. October 22, 2018

[2/2] In relation to this incident, José Mourinho has been formally reminded of his responsibilities whilst both clubs have received similar official reminders in terms of the behaviour expected of their staff and players at all times whilst in the technical area.October 22, 2018

Last week Mourinho was charged by the FA over alleged comments made in the immediate aftermath of his team's dramatic 3-2 Premier League win over Newcastle United.

Television cameras captured Mourinho muttering what are purported to have been "abusive and/or insulting and/or improper" remarks.

Mourinho originally had until last Friday to respond but was granted an extension to Wednesday.