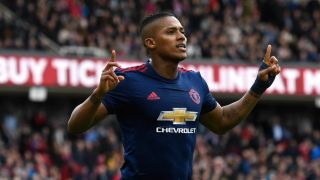 Antonio Valencia has signed a contract extension with Manchester United that ties him to the club until June 2019, with an option for one additional season.

The Ecuador international joined United from Wigan Athletic in 2009 and has since made 291 appearances in all competitions, winning two Premier League titles, one FA Cup, two EFL Cups and the Europa League in the process.

He has been a key figure under Jose Mourinho this term, starting 41 matches, and has now committed his future to the club.

"Manchester United has been my life since 2009 and I am absolutely delighted to have signed a new contract," Valencia stated.

"Wednesday evening's Europa League win provided the one trophy this club had never won and it was a true honour for me to captain the team for the final.

"I would like to thank the manager for the confidence he has given me this season and I am sure that we will be challenging on all fronts next season.

"I would also like to say a big thank you to my family, my team-mates and, of course, the fans, for their amazing support."

Mourinho voiced his delight with the 31-year-old's new deal, saying: "It is no secret that I had been an admirer of Antonio long before I joined the club.

"I knew what a fantastic player he was and he has not disappointed me on that front. However, what I could never have imagined was what a great person he is.

"I know I have said this before but I truly believe it is a real privilege for us to have such a good player and such a good man. I am delighted he has extended his contract."