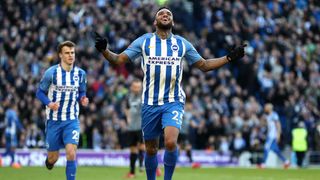 A club-record signing in January, Locadia opened his account in the 15th minute at the Amex Stadium as the Seagulls made light work of fourth-tier opposition with a Premier League scalp to their name this season after beating Stoke City.

Connor Goldson headed in prior to half-time before Leonardo Ulloa put the seal on victory with the first goal of his second spell at the club.

Jonson Clarke-Harris snatched a late consolation for the League Two side but they never truly threatened to deny Chris Hughton's men a fourth match unbeaten in all competitions.

The lowest-ranked club in the fifth round, Coventry received an early reminder of the task at hand as Locadia hit the post inside five minutes, but the Sky Blues were game opposition and Clarke-Harris headed Jordan Shipley's corner against the crossbar.

But Locadia did not need a second invitation to make the breakthrough, burying Anthony Knockaert's low cross with an assured first-time finish.

1 - Jürgen Locadia has scored on his Brighton debut, netting with his first shot on target for the Seagulls. Impact.February 17, 2018

Goldson doubled the lead in the 34th minute, nodding in a Markus Suttner corner for his first competitive goal since April 2016.

The visitors' aerial struggles proved their undoing once more on the hour, Ulloa emphatically heading Bruno's cross beyond Lee Burge.

Clarke-Harris again tested the woodwork soon after before the striker eventually got on the scoresheet with a poacher's finish late in proceedings, although Brighton went closest to restoring their three-goal cushion before full-time, Sam Baldock's effort hitting the bar.

- Brighton have only lost two of their last 16 FA Cup home games (W9 D5), with both defeats coming at the hands of Arsenal.
- Coventry have won just once in their last 11 away FA Cup matches against top-flight opposition (D2 L8), losing the last four in a row.
- The Sky Blues have lost four consecutive matches in all competitions for the first time since December 2016.
- Goldson has scored his first competitive goals since April 2016 versus QPR – 669 days ago.
- Locadia has scored on his Brighton debut, netting with his first shot on target for the Seagulls.