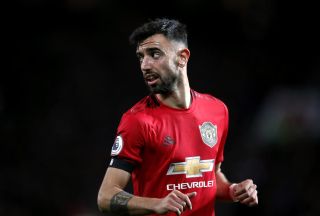 Bruno Fernandes could not inspire to Manchester United to victory on a promising debut as the Premier League clash with Wolves ended goalless and without a widely discussed Old Trafford protest.

This has been an up and down week for Ole Gunnar Solskjaer’s side, whose Carabao Cup win – but ultimate exit – at Manchester City came in between fans attacking Ed Woodward’s house and some much-needed transfer business.

The executive vice-chairman was not in attendance for Fernandes’ capable debut on Saturday evening, when a planned 68th minute anti-Glazer protest failed to come to fruition as United and Wolves fought out a 0-0 draw.

Barely anyone left Old Trafford during the walkout, nor was there anywhere near the same level of vitriol heard at recent matches Instead, fans appeared to focus on the past and the present.

Sir Bobby Charlton was among those in attendance as the club remembered the victims of the 1958 Munich air disaster ahead of a match that Fernandes looked most dangerous in.

The 25-year-old, who arrived from Sporting Lisbon on Thursday to much fanfare, was not overawed by his new surroundings and had chances to fire United to victory.

Wolves were also a threat and Adama Traore was a handful, but neither side could find a breakthrough as Solskjaer’s men again failed to capitalise on a slip up by Chelsea.

Substitute Diogo Dalot went close at the end of a match that started with a huge roar for Fernandes and respect being shown to the Busby Babes ahead of the 62nd anniversary of the Munich disaster on February 6.

Wolves started the brighter, with Andreas Pereira’s strike wide the best the hosts could muster early on.

Wolves fans made loud and unfavourable comparisons to Ruben Neves when the United new boy struck his first shot wide in the 33rd minute, before forcing former Sporting team-mate Rui Patricio into a save after meeting a Luke Shaw cutback with a powerful drive.

Traore sent a fizzing strike narrowly wide at the other end and ended the first half in pain, having hurt his shoulder when hauled to the deck by Harry Maguire.

The Wolves flyer was given the green light to continue and re-emerged for the second half, which was only eight minutes old when Diogo Jota went on a superb run, darted around Lindelof and chopped past Maguire, only to lose his balance in front of goal.

Fernandes, who had just received his first United booking for taking down Jimenez, saw a free-kick saved by Patricio, who was relieved to see Juan Mata strike inches wide soon after swivelling on the edge of the box.

The Wolves goalkeeper parried a thumping, long-range Fernandes effort as the clock ticked into the 68th minute, when very few seats appeared to empty despite the much-mooted protest.

There could well have been a few exits moments later, though, had De Gea not been alert to tip over Jimenez’s strike from an acute angle following Traore’s charge through the middle.

Pereira had an effort before being replaced by Mason Greenwood, whose long-range shot nearly brought a breakthrough. The hopeful effort ricocheted off Willy Boly and Conor Coady – but Patricio was just able to save.

Daniel Podence came off the bench for his debut and Doherty was thwarted at the near post as Wolves pushed late on, while Dalot went agonisingly close to snatching a winner deep in added time when he headed wide.