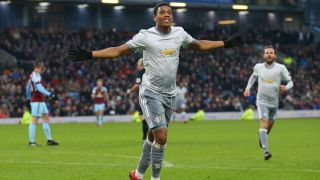 Manchester United moved to within nine points of Premier League leaders Manchester City, at least temporarily, with a 1-0 win away to Burnley on Saturday.

A superb strike from Anthony Martial early in the second half was enough to give Jose Mourinho's side a fourth victory in a row in all competitions, despite a lacklustre overall display.

The goal, Martial's ninth in the league this season, was the highlight of a game low on quality and sent a timely reminder to manager Jose Mourinho ahead of the suspected arrival of Alexis Sanchez from Arsenal.

United fought back to claim a 2-2 draw in the reverse fixture in December and they looked similarly out-of-sorts for much of the contest at Turf Moor, in which they managed no shots on target until Martial's 54th-minute strike.

Burnley, who have only won once against United in 25 meetings, looked a threat in their pursuit of an equaliser, with Johann Berg Gudmundsson hitting the crossbar with a free-kick and Ashley Barnes missing a header.

United, without Henrikh Mkhitaryan, who is expected to join Arsenal as part of the Sanchez deal, survived the closing stages to make it four wins and four clean sheets in 2018 and put some pressure on City ahead of their meeting with Newcastle United later on Saturday.

Burnley, just as they were at Old Trafford, were the brighter of the teams in the early exchanges and it needed a fine block from Phil Jones to deny Barnes a clear shot on goal from just inside the area.

United were edging possession but doing little of note with the ball in a strangely casual first half that ended without a shot on target from either side.

The closest the visitors came to breaking the deadlock in the first 45 minutes came through Ashley Young, restored at left-back in place of Luke Shaw after serving a three-match ban, who skinned Gudmundsson to the left of the penalty area before curling a shot just wide of the right-hand post.

Martial combined with Pogba before shooting just wide as the half drew to a close, but the France international made the most of his next opportunity with the first piece of real quality in the game.

Romelu Lukaku picked him out with a good pass and Martial feinted to curl a shot into the right-hand corner before choosing to blast his effort into the opposite side of the net off the crossbar.

3 - Anthony Martial has scored in three consecutive Premier League appearances for for the first time. Flourishing.January 20, 2018

Burnley immediately sought an equaliser, Gudmundsson clipping the woodwork with a free-kick from the edge of the box before referee Mike Dean waved away appeals for a handball by Chris Smalling in the United area.

The pressure from the home side continued, with a looping Ben Mee header tipped over the bar by David de Gea and Smalling called upon to get a crucial touch to deny James Tarkowski the chance for a tap-in.

Barnes then glanced a promising opening wide following a long ball but United could easily have made the win safe either side of that miss, with Pogba and Jesse Lingard both choosing the wrong option at the end of promising counter-attacks.

Sean Dyche made some attacking changes, which included loan signing Georges-Kevin Nkoudou, but United survived to claim an important three points from a game that could be their last before Sanchez's arrival and only a good save from Nick Pope denied Martial an impressive second goal.