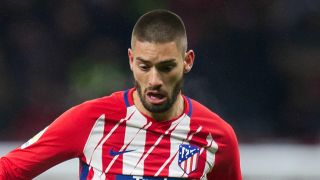 Yannick Carrasco, linked with a move to the Chinese Super League (CSL), has been left out of the Atletico Madrid squad for a Europa League tie with Copenhagen.

The 24-year-old has featured in 17 LaLiga games this season, scoring three goals, with Diego Simeone's men second in the table behind leaders Barcelona.

Amid reports the Belgium international is set to join CSL side Dalian Yifang in a €30million deal, Carrasco was a conspicuous absentee for Thursday's second leg against Copenhagen.

Atletico would be unable to secure a replacement for Carrasco until the end of the season as the LaLiga transfer window is currently closed.

Carrasco was an unused substitute in Sunday's 2-0 LaLiga win against Athletic Bilbao, but came off the bench to help his side to a 4-1 win in the first leg of the Copenhagen tie.

Dalian Yifang won China League One last season to move into the CSL for the 2018 season, with their season getting under way at Shanghai SIPG on March 3.