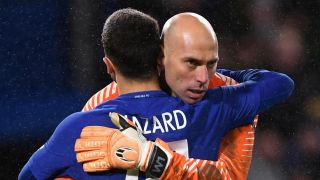 Substitute Eden Hazard spared Chelsea's blushes by scoring the winning penalty in a shootout, after their FA Cup replay against Norwich City had ended 1-1 at Stamford Bridge.

Chelsea were clinical from the spot after a frustrating third-round replay that saw them miss a host of chances, have three penalty appeals turned down and Pedro and Alvaro Morata sent off.

Michy Batshuayi had given Chelsea the lead after 55 minutes with the Blues' first goal since Marcos Alonso's 84th-minute strike against Arsenal on January 3.

But Jamal Lewis levelled things up in the final minute of stoppage time, before chaos ensued in extra period.

Referee Graham Scott and his VAR denied Willian and Morata penalties in the added 30 minutes – the latter joining Pedro in being shown red.

The nine men saw out the few remaining additional minutes and made no errors from 12 yards to set up a fourth-round meeting with Newcastle United.